“It always feels good to give back,” says Scott Middlebrooks, former warden of the Wilkinson County Correctional Facility in Woodville, MS. Staff at the facility decided they wanted to fill a need and create bookshelves to donate to the local schools. A plan was made to use pallets, on their way out to the trash, as a source of lumber to build the bookshelves in the carpentry class with volunteer residents who were excited for the project.

The result was remarkable.

Curtis Ross is the principal of the nearby William Winans Middle School.

“I was invited to see,” he says, “and when I came over, the guys had built bookshelves out of crates. And it was like, ‘oh my goodness, this is just awesome’. The most interesting thing I’ve ever seen.”

“Before we made the first delivery of these bookcases,” explains Dr. Roscoe Barnes, former chaplain of the facility, “the superintendent came here, the principal came, and their administrative assistants came with them. Some of the men who had been working on the bookcases? They were in the meeting. They saw the school officials. And when they saw the reaction? I thought they were going to cry. I mean, you could see the emotion. They’ve got something that they created, and they know is going out into the world with their stamp on it, and they know it’s going to be appreciated by officials, teachers, students.”

Saheed Davis is a resident who helped build the bookshelves. “It also reforms us,” he says, “and shows the community and the public that just like these pallets can be reformed, we also can play a part and participate in reform.”

David Crabb is another resident volunteer. “And to be able to take the pallets and to make the bookshelves for the kids, it’s just more than you could ask for.”

“In a sense,” says instructor Larry Jackson, “it’s just showing them how that you can take something that someone’s throwing out and just think it’s nothing, and we take it into my class, we work with it, and we work with it.  It turns out to be a masterpiece.” 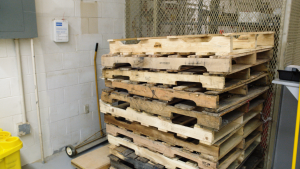 The facility’s partnership with the school district doesn’t stop at the bookshelves. They also filled them with books.

Additionally, the high school football team didn’t have lockers. The facility fixed that. The residents handcrafting the lockers just in time for football season. There’s also discussion about creating an outreach program where residents can have a virtual meeting with students, encouraging them to make good choices in their lives.

“Well, I think it’s vital that MTC and Wilkinson in particular,” says former Warden Middlebrooks, “is a good partner in the community. Because we live here; the staff that work here live in these communities. Their children go to these schools. So, this is our way of giving back to our local community, because they give so much to us.”

“Hats off,” smiles Principal Ross, “to the work and the labor of love that you all have put into this process. I thank you from the bottom of my heart.”