Graduates at Otero Stand Tall After Months of Hard Work

You might not expect to hear graduation music coming from inside a prison, but it is. At the Otero County Prison Facility in New Mexico, men and women recently celebrated their academic accomplishments at a graduation ceremony. 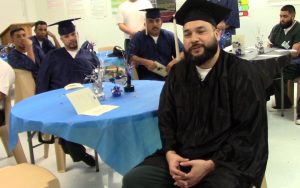 “If I can do it, you can do it,” says Robert Martinez who earned his GED. “It just takes a little bit of effort and hard work.”

Robert explains why he decided to put in all the effort to achieve his GED.

“Me wanting more in life, positive changes. And I guess trying to prove something to myself that I’m not what they see me as, you know.”

Marcela Still admits she didn’t have the best of intentions when she started taking classes to earn the Mexican equivalent of the GED called INEA.

I just started going to classes because I just wanted to “kill time” as they, as we say it here.” 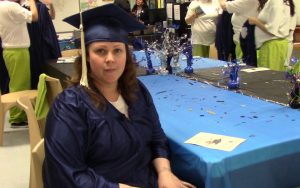 But killing time morphed into a passion to learn and improve. Marcela even became a tutor for the course.

“It’s a pleasure for me to accomplish something in my life, to be able to finish this goal. It makes me better for my future. I’m very proud of myself because I accomplished it, and I’m willing to do better.”

Marcela teared up thinking about her mother and what the graduation has meant to her.

“My mom was even in shock,” she says, “because to think of me being a tutor, it was like…at least I gave her a [reason] for her to feel better about me.”