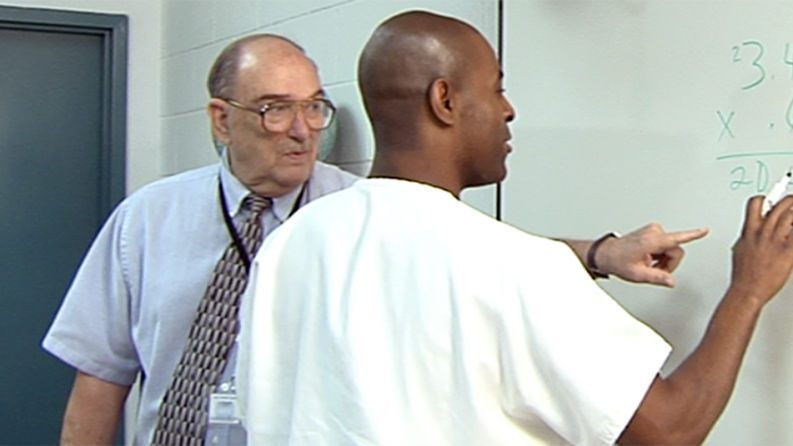 Every year MTC recognizes staff for going above and beyond. It’s part of what’s called the Celebrating Excellence Awards. One category is programs. This award goes to the person who has a significant impact in the lives of others. And this year’s winner was Jim Powell, who was nominated as the principal of the Billy Moore Correctional Center in Overton, Texas.

Sadly, Mr. Powell passed away before receiving this distinct honor. His co-workers recently held a ceremony to present the award to Mr. Powell’s family. The event was reported in the local paper, further honoring his legacy.

To help document all the good he did, staff members, along with incarcerated men who were his students, submitted their thoughts about Mr. Powell.

“He was a mentor to me and encouraged me all the time. He kept at me, and he is the reason I am the teacher today that I am.”

“He took great pride in his education department and worked long hours to see that it ran smoothly. He always took the time to listen to any problem you had and helped solve them.”

“Mr. Powell was very dedicated to his job with a desire to make a difference in the lives of offenders.”

“Jim wanted his students to excel in life, and to look past the negative, and position themselves for the future.”

“Mr. Powell was a generous soul who chose not to give up when he believed in someone. He made a point to know your name and say ‘hi’ every time he saw you.  When he asked ‘how are you?’, he wanted to know the answer.  Mr. Powell was dedicated to the people he worked with, whether they were students, teachers, security or offenders. Everyone was human, and he helped to direct them towards their path in life.”

“When I arrived here at the Billy Moore unit almost four years ago, he was the first person I met who was truly BIONIC (Believe it or Not I Care, MTC slogan).  Of course, there are a lot more officers and employees here that are (BIONIC), but I’ll never forget he was the first I met.”

“Mr. Powell’s genuine desire to see people further their education will never be forgotten.  Though he was tough, he invested a lot into many of us!”

“May God bless his soul, family, and those of MTC who hire people such as him.”

“His greatest passion in life was to challenge others to better themselves. I’ve seen him bring families closer together through his efforts and motivation.  I feel lucky to have had my experiences with Mr. Powell. He was a true blessing every day, and I am thankful.”

“I remember asking him one day, why is it that he did what he did, and he replied, ‘I do it for you guys.’ Many of us here at Billy Moore loved and respected him and will always remember him in our hearts.”

MTC honors Jim Powell for the indelible impact he had on the lives of those he worked with and served. Our deepest sympathies extend to his family and loved ones, and we hope their mourning can be lightened in some way knowing how his influence was so profound and life-changing to all those around him.