The weather was dreary and wet, but their spirits were high. 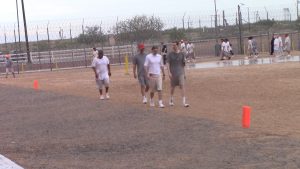 “It sounded like a really good way for us to do something to give back to the community. I think there can often be some misconceptions about us as inmates: that we don’t really care; that we don’t have compassion.”

More than 100 inmates at MTC’s Otero County Prison Facility participated in a walk/run to raise money for victims of the deadly August shooting in nearby El Paso, Texas.

“I decided it was time to try and help out people outside of our little community here.”

Justin Trout was touched when he heard about the tragedy.

“So, I sat down and thought, ‘what better way to do it than to come out and run and walk.’ I contacted our rec specialist, and she helped put it together.”

“I knew that was coming from their hearts, you know? And I thought that was a great idea: giving something back to the community.

Officer Castile opened some doors but says it was really the inmates who made it happen.

“They just ran with it. They did the stop watches, they did the timing. All I did was stand around and oversee them.” 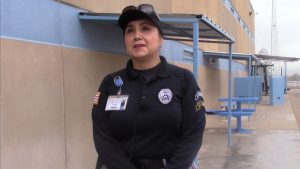 “I hope that the money goes to a good cause and helps some people who are really struggling, going through some grieving right now. And I just want to let them know that we do care. And we hope that there’s some healing and some mending.”