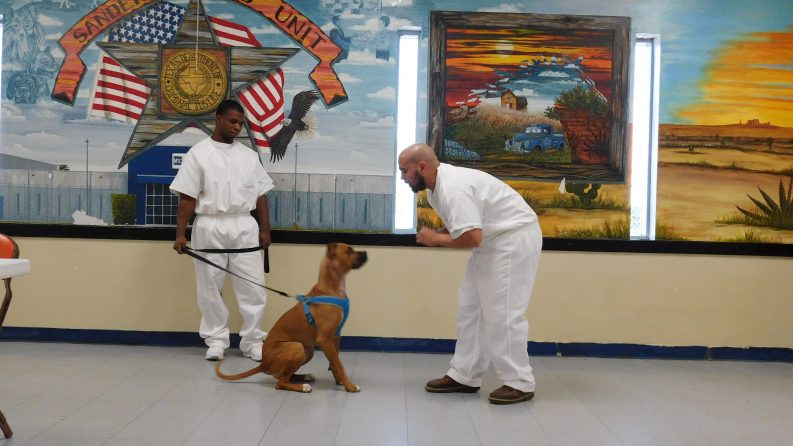 Since 2009, MTC’s Sanders Estes Unit in Venus, Texas has been involved in the P.A.W.S. of Hope program. P.A.W.S. stands for Prisoners Assisting with Shelters. Incarcerated men at Sanders Estes, who have been approved as trainers, work with dogs from the nearby Alvarado Animal Shelter and prepare them to be adopted.

The dogs stay in the cell with their designated trainer, where they are house broken and kennel trained. They are also taught to be obedient pets, as well as a few fun and interesting tricks.

This program saves the dogs from being euthanized. But it also helps in the process of saving the men who train them.

David Bustamante says, “I love working with the dogs and being a part of their second chance at life. It reminds me that even though society might have given up on us, it’s not too late to make a change and be accepted again.”

“Everyone thinks it’s us training these dogs,” states Jason Birdwell, another trainer. “But in reality—the dogs are training us. They teach us a sense of responsibility and how to care for someone other than ourselves.”

Currently, the facility is in its 24th session of P.A.W.S. of Hope. The Star-Telegram covered the story. Click here to see their video on the dog program.