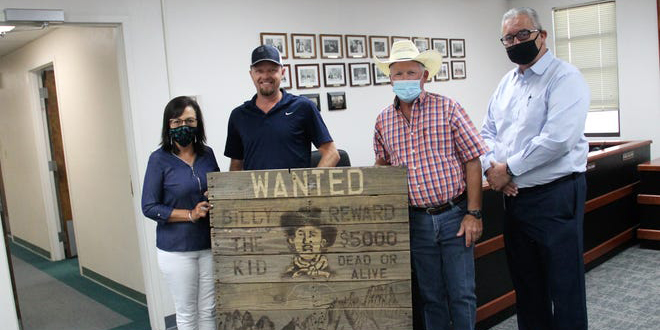 Alamogordo Daily News
Otero County prison inmate Gonzalez made a work of art  commemorating Billy the Kid which was gifted to the Otero County Commission during a ceremony Aug. 10.

The artwork was made out of wood pallets and features “Wanted” carved into wood, a rendering of Billy the Kid and the Organ Mountains.

“This is nice. This is really nice. The county appreciates everything you do down there,” Otero County Commission Chairman Gerald Matherly said to Otero County Prison Facility Warden Ricardo Martinez. “It’s beautiful.”

He was a gunfighter who was known to have killed 27 men including a few during the Lincoln County War of 1878 -1881.

He was killed by Sheriff Pat Garrett in 1881.