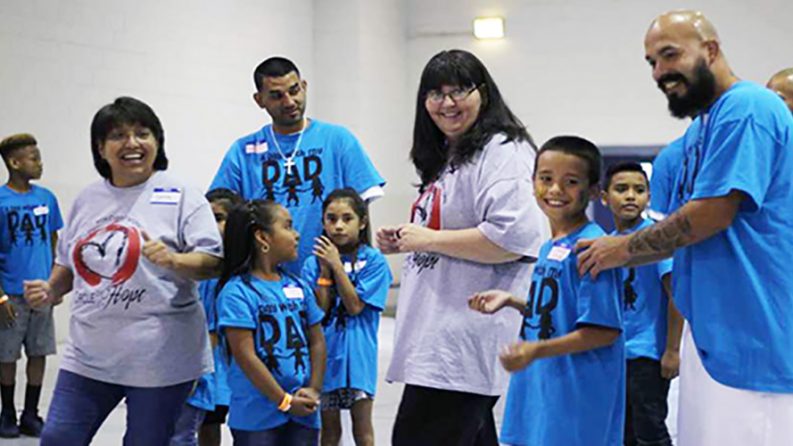 The importance of being a father could not have been more emphasized than it was at Cleveland Correctional Center on June 17 for “A Day with my Dad.”

Hosted by the center along with Covenant with Christ International and New Pathways for Fathers and Families, “A Day with my Dad” gives children the opportunity to spend time with their incarcerated fathers in a variety of fun activities.

Activities include playing games like basketball or taking pictures together. Other families danced together or had fun in a bounce house while others built crosses together or won prizes in competitions.

The event has proven to be very important for families as they are cut off from a father figure with little time to spend in visitation hours. “A Day with my Dad” gives more than five hours of time for children and families to spend with imprisoned fathers.

“We were able to touch entire families,”

Shippey emphasizes how important this event is for families with many of the fathers unable to see their kids.

“They’re now able to love them and hug them,” she said.

This includes some children who haven’t even had a chance to meet their father prior to being placed in Cleveland Correctional Center.

Polk explains that Cleveland Correctional Center also has classes to help imprisoned fathers learn more about fulfilling their roles toward their children such as “Inside-Out Dad.” Having fathers work toward fulfilling this role makes “A Day with my Dad” more rewarding for both the parent and the child.

“It’s almost as if it’s like they’re back at home,” said Polk.

Many of the inmates agreed with the effectiveness of the day, such as Victor Hernandez who spent time with his daughter, Gracie.

“I haven’t seen her since February and this is the most time I’ve spent with her,” he said.

Victor Hernandez describes the experience as emotional as he participated in many events with his daughter, including an opportunity to make their own cross and even perform some parental functions as she ended up taking a nap.

“It was nice holding her and rocking her,” he said.

Another father, Joseph Johnson Sr., has spent eight years in prison and commends Cleveland Correctional Center’s efforts to strengthen the bonds with families such as he did with his son.

“It’s nothing like you’ve never seen before,” he said.

A third inmate, Henry Cabrera, was given the opportunity to bond with his son, Aiden. He also commends everyone who put the event together.

“You don’t realize how much people care,” he said. “People that don’t know you, your history, your story.”