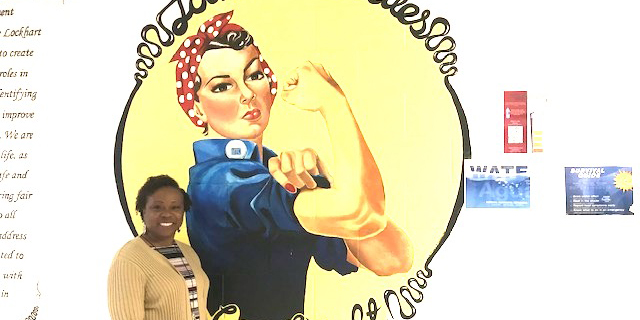 Looking back, Misty Campbell said she feels her prison sentence at the Lockhart Correctional Facility may have been a blessing. Not that she wanted to go to prison, mind you, but she can’t help but acknowledge the opportunities it afforded her.

“My prison sentence saved my life,” said Campbell, who spent four years in the jail. “If I wouldn’t have got a prison sentence, I would still be in the horrible, volatile, violent situation I was in.
“I would have never left.”

Campbell was one of the original members of the first set of classes offered by Austin Community College (ACC) at the correctional facility about a year and a half ago. She received a certified production technician certificate, learning all of the safety, production, maintenance and quality aspects that go along with the field.

Now, she works at the community college as a reentry specialist, helping women at the correctional facility land on their feet when they reenter society by assisting them with reentry plans, helping them find housing and helping them line up interviews with prospective employers.

“When I was in the Lockhart facility, I became one of the peer educators,” said Campbell. “I found a need to help a lot of people with finding housing and kind of having their ducks in a row before they hit society, or the free world, as we would say.

“You can overcome this if you choose to. I signed my contract with ACC the day I got out. I’d Just made up my mind that I wasn’t going to let my felonies stand in the way of anything.”
Campbell’s story of success is but one of many coming from the women leaving the correctional facility.

According to Warden Jennifer Brown, 12 offenders have completed the ACC vocational certificate program, and all 12 have gained employment upon reentering the work force.
“We went to folks in the community and Austin where these offenders are going and asked, ‘Hey, what do they need to be hirable?’” said Brown “They have a felony conviction, you know?
Some people are scared of that, but we want to make sure they have a certificate in hand that says, ‘Hey, I can do this job.’”

Aside from production technician course, ACC also offers opportunities to earn welding and manufacturing certificates at the correction facility. Brown noted the University of Texas offers free classes for offenders, as well.

“With our UT classes, we’re preparing them to get a higher education, not just a GED or a high school diploma,” said Brown. “We’re talking a college transcript they get to have in hand.”
Brown, who’s served as warden of the correctional facility for about two years now, said she wants to clear up some of the misconceptions people may have when thinking about a prison.
“When they come into prison, the jury of their peers has already judged them,” said Brown. “When they come to prison, it is not our job to punish and it is not our job to judge.

“It is our job to rehabilitate that offender and make sure that they are successful … We want to prepare them to stand up on their own – to be better mothers, to be better sisters. That’s what we want.”
Another way the correctional facility has aimed to help its inmates has been the Paws in Prison program, something Campbell was a part of during her time at the facility.
Through the program, dogs are adopted from the local animal shelter to give inmates a chance to learn training and grooming techniques, as well as take in all the love and joy we often associate with our furry, four-legged friends.

According to Campbell, a self-proclaimed country girl, the Paws in Prison program helped her immensely with her mental health.
“To say that we’re broken is an understatement,” Campbell said. “[The Paws in Prison program] gave me a sense of self-worth again, knowing that if I can teach that dog to do this, I do have some worth and a little bit more self-respect.

“Just the unconditional love your dogs give you gives you so much – the feeling that you are worthy of someone’s love.”

For Brown, the of idea of providing a space for her inmates to succeed goes beyond educational and certification programs. It also includes opportunities for the facility’s more artistic inmates to flourish.

When you walk through the hallways of the Lockhart Correctional Facility, it doesn’t look like anything you’ve seen in movies or read about in books. Where you might expect blank, drab walls, you’ll find artwork spanning the entire facility. You’ll find beautiful murals and inspirational quotes, all created by the women serving time at the prison.

The visitation center contains one of the more expansive pieces of art, with a mural spanning the entirety of the wall featuring a plethora of famous smiling and cheerful cartoon characters. The idea, Brown said, was to provide a space where mothers serving time at the facility could spend time with their children in a comfortable setting.

Later this month, Brown said she expects the facility’s Empowering Women of Purpose program to kick off. Through the 9-month program, inmates will be able to learn about what it takes to start their own business. The program will even include opportunities for investors to hear their business pitches, potentially landing them funding before they’re even released.

“We just truly want to give back any way we can,” said Brown. “It’s important for us to do this.

“It gets in your blood and it’s really about helping people – giving people second chances and opportunities. Someone has to do it.”

Gregory S. Coleman Unit is accredited by the American Correctional Association achieving over 99% compliance for both mandatory and non-mandatory standards in its most recent audit. Other accreditations and certifications include the Correctional Education Association and the Prison Rape Elimination Act (PREA).