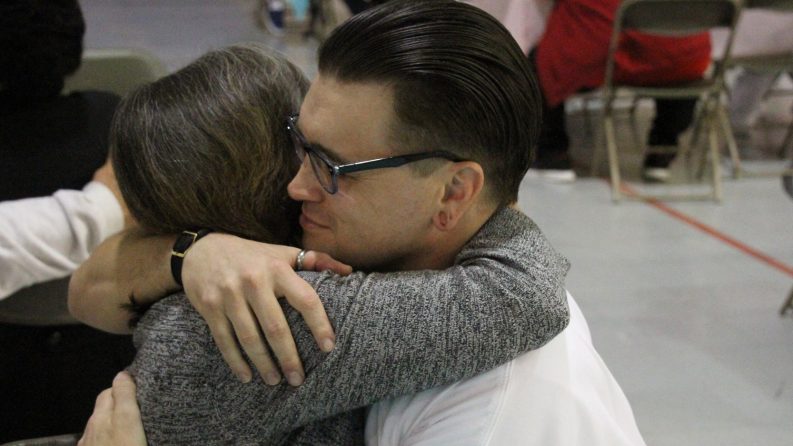 Mother’s Day can be a lonely holiday for moms whose children are incarcerated. Wanda Sims of Bryan-College Station has spent many Mother’s Day holidays without her son, T. J., who is serving the last three years of a 15-year sentence for intoxicated manslaughter at the Cleveland Correctional Center.

To make the Mother’s Day holiday a little easier, the Cleveland prison on Friday, May 10, hosted a dinner for Sims and about 30 other mothers.

“It’s been really special. He was 28 years old when he was incarcerated. It’s God’s plan, I know, but it’s been hard,” Sims said.

A recovering alcoholic, Sims said her three children helped her through the worst years of her life as she struggled with sobriety.

As the moms arrived at the facility for the Mother’s Day event, they were greeted with hugs and music performed by an inmate band, and then were treated to a meal with their sons.

For Amy Dredla of Athens, Texas, this was the third Mother’s Day in prison with her son, Joseph, who was sentenced to five years in prison in 2016 for intoxicated manslaughter.

“Hopefully this will be our last,” said Dredla. Her uncertainty was not about whether Joseph would return to prison but because his release date has not been determined.

“I am never, ever getting in trouble again,” Joseph said.

After dinner, the moms were presented with gifts, such as costume jewelry and body spray, that their sons had selected from items donated by Covenant for Christ.

“This meant the world to me. This is amazing because we just got to sit and visit, and spend time as mother and son,” said Debbie Talley, who drove in from San Antonio to spend a couple of hours with her son, Nicholas.

“He is here for drug possession. A lot of people don’t understand just how damaging drugs are to our society. It’s pervasive,” she added.

Reflecting on the time before her son was incarcerated, Talley said she worried that she would one day get a phone call telling her he had died of a drug overdose.

“You pray that is not the phone call you get. So when the call comes that they have been arrested, you think, ‘That’s probably for the best because they will have to get clean,’” she said.

Nicholas said that after 10 years of drug use, which began when he was 15, he is happy to be clean and sober, and is looking forward to going to college and having another chance at life outside of prison.

“I want to start my own health foods business,” he said.

In order for the prisoners to be successful in the free world, Mike Upshaw, warden at Cleveland Correctional Center, believes it is imperative that they have support and close relationships with their families.

“They will need their families to support them as they transition from being an offender to a free citizen again,” Upshaw said.

The Cleveland facility is operated for the Texas Department of Criminal Justice by MTC Corrections. The motto of MTC Corrections is “BIONIC – Believe It Or Not, I Care,” which Upshaw says is truly heartfelt.

“We care about these guys for whom we are responsible, but more than that, we want them to be successful. We want to do everything we can while they are here with us to give them the tools they need. Programs like this Mother’s Day event are a big part of that,” he said.

Critics might say that life in prison should be hard for the inmates without opportunities to celebrate holidays with their families, but Upshaw disagrees.

“The people who would criticize this know nothing about the prison system and the offenders who come through. Well over 85 percent or higher of the prisoners are going back to their communities when they are released. The people who feel that way could very well already have a neighbor who was in prison,” Upshaw said. “It’s our job to make sure that person is a good neighbor when he returns to his community.”

To ensure they are successful as they look for jobs, Cleveland Correctional Center helps inmates earn their GED and offers vocational training through the Prison Entrepreneurial Program.

“Some of these guys have all the talent in the world. They just went down the wrong road at some point in their lives,” he said. “I look at the situation of these guys in prison and give God the glory. They are here for a reason. God has things He needs for them to do.”