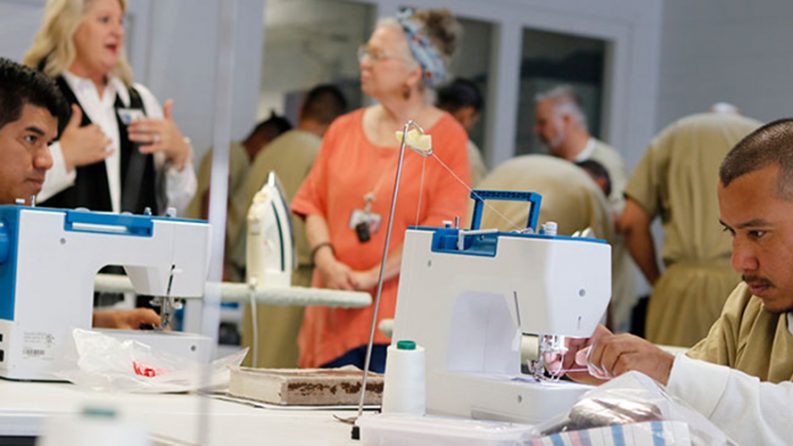 Gary Paige, 58, works on a Chicago Cubs blanket Wednesday at the Bridgeport Correctional Center. Paige, a Navy Veteran, hopes to take his skills learned in the Moses Project and apply them to running a non-profit that gives out blankets to veterans after his release. Messenger Photo by Austin Jackson

Outside the Bridgeport Correctional Center (BCC), barbed wire atop the fences glints in the sunlight. The heavy metal doors inside slam with a thud, followed by the click of a dead bolt sturdily locking into place.

It’s a minimum security outfit, but it’s still a prison.

BCC inmates wear jumpsuits, some beige, some white. Stark concrete walls close in on them. The surroundings serve as a withering reminder of their predicament.

But some time is better than others for 32 men in the prison.

For three hours every Wednesday, these inmates escape through the hum of a sewing machine in an assembly line of good.

Under the deliberate hands of these men, some with tattoos crawling up their arms, they make quilts, blankets, teddy bears and bassinets. The custom crafted items are donated to organizations that put them in the arms of kids, babies, parents and grandparents who need them.

The program is called the Moses Project. BCC started the program about seven years ago, recently transitioning it from the women’s prison that was shut down to the men’s prison in Bridgeport.

Tough guys, some from gang and cartel backgrounds, have formed a quilting guild.

Blankets made by the men at BCC go to critically ill children at Chemo Care Bag Ministry and Project Linus. The inmates also make bassinets, fully equipped with custom stitched and stuffed mattresses, sheets and blankets, which are given to local crisis pregnancy centers like Wise Choices.

“It bridges the gap from the inside of the prison to the outside, from prison to community,” Pam Randall, director of the BCC program, said. “It builds self worth. They’re helping society even though they’re here.” WAY TO HELP – Jay Lloyd, 48, inspects blankets and prepares baskets that will soon be donated to Wise Choices. Lloyd, a repeat offender, said the Moses Project was his first chance at doing something good for the community in his time in the system. Messenger Photo by Austin Jackson

FACES OF THE ASSEMBLY LINE

Navy Veteran Gary Paige, born and raised in Alabama, was driving a truck for a living before he got into trouble in Texas.

He had marijuana on him, and when he was pulled over, law enforcement searched his vehicle. He was later charged with possession of marijuana and given a five-year sentence.

It was a tough break for the 58-year-old. But he’s making the most of his time, serving his sentence at BCC, especially on Wednesdays. It’s his favorite day of the week now. It’s the day he gets to help the kids.

This week he picked out bright red and blue fabric, combining it with a Chicago Cubs pattern as a center piece. A smile spread over Paige’s face as he saw the blanket come together.

“A little Cubs fan will love this,” he said, as he carefully pushed the colorful fabric through the sewing machine with both hands. “I hope they love it.”

Soon the blanket will go to a kid and a family. Paige said he came from a family that sews, but he’d never taken it up himself.

He’s grown to like it, though, and it’s meaningful, not just a time-killing task.

“That’s the endearing part to me,” Paige said. “It’s going to these kids that their mother can’t afford it. It became poetic to me because it made me feel like I was doing something for somebody.

As Paige finished his Cubs quilt Wednesday, he took it to quality control, a table where an inmate and seasoned veteran of the Moses Project set scrupulous eyes on the intricate seams and patterns of each blanket that’s completed. GIVING BACK – Every Wednesday afternoon men gather in the recreation hall of the Bridgeport Correctional Center to produce beds and bedding for babies in need for the Moses Project. Beds, blankets and other items are donated to local organizations and given to low income families and sick kids. Messenger Photo by Austin Jackson

Jay Lloyd, 48, an inmate currently serving a 20-year sentence for running a prostitution ring has been part of the Moses Project from the beginning. When Randall told them about the project, Lloyd said there were some confused faces.

“None of us knew how to sew,” Lloyd said. “She sat us down and taught us, and we’ve been doing it from there. Now we teach the other guys how.”

For the past four years, he’s climbed the Moses Project ranks. He’s given up the sewing machine to be the gatekeeper, inspecting the work of the crew.

He’s the first to admit he’s not afraid of sending some work back if it doesn’t meet his standards.

“I check it up and down and make sure the stitching is straight,” Lloyd. “If they get too far off, I’ll send it right back. They pretty much see me as the bad guy. But they understand. If we’re gonna do it, we gotta do it right. We can’t send stuff out half way.”

The best part of the job, Lloyd said, is hearing stories from the families who have received the blankets and bassinets – families who cherish the blankets or terminally ill children who received a teddy bear that brightened their day.

It’s an affirmation that they’re doing something good.

“We get stories back from the mothers and grandmothers that receive the blankets, a week ago we heard from a grandma that was really touched,” Lloyd said. “There wasn’t a dry eye in the building when they told us that.”

Lloyd is a repeat offender. In his time in and out of the system, he said he’s never been part of a program like this.

For Lloyd, the Moses Project is a chance at redemption.

“It’s like I’m paying it back,” Lloyd said, as he placed a teddy bear in a basket that will soon be given to a family. “I’m doing something good for society.”

At 4 p.m. Wednesday, the sewing machines stop. The works-in-progress are packed away, and Sammy Alexander, another Moses Project veteran who’s been on the assembly line since the beginning, starts taking inventory.

Alexander, 46, runs a tight ship. Each and every needle, pair of scissors and every other piece of material or equipment used in the Moses Project is accounted for under his watch. He’s got little boxes for each item with labels.

“I count everything, every day,” he said. “We’ve lost one needle, and that was the day I wasn’t here.”

Alexander, before he got arrested for prohibited sexual conduct, worked for the state at the Health and Human Services office. In his past job, he took inventory, too.

The inventory done at BCC is a little more serious than it was when he was on the job site, he said. It helps keep him sharp.

“If a needle drops, everything stops,” Alexander said. “We drop everything we’re doing, and we will search for hours until we find it.”

It’s a serious job, he said. A missing needle or set of scissors could end up as contraband, and he does everything he can to make sure that doesn’t happen.

Alexander is more than halfway through a seven-year sentence. In his time at BCC, he’s become a defacto leader of the inmates in the Moses Project, and he’s seen them change before his eyes as they churn out blankets.

“The greatest thing I get to see is when they hold something up and show off what they’ve accomplished. They have some self-worth again,” Alexander said. “I’ve seen a lot of guys lives changed in here. They’ll be tough out there, talking trash, and in here they change. They’re amazed they could do this with just a little bit of training.”

“This here,” he said as he pointed out at the operation. “It makes me feel like I’m doing something. We’re not thinking about us; we’re thinking about kids.”

Alexander said he could be getting out soon. In addition to rejoining the workforce, he looks forward to making some blankets for his two granddaughters. The skills he learned in the program are helping him leave a positive legacy.

“I want to make something to remember me by forever,” he said. “These blankets are personal. Buying things is OK, but when you make something, it’s got a story. It has a memory attached to it.”

On Wednesday, representatives from Wise Choices, a pregnancy crisis center based in Decatur, came to BCC to thank the inmates for their work and meet the men who had made around 50 baskets for the organization.

Wise Choices CEO Connie Wyatt told the story of local grandparents who were suddenly tasked with raising four grandchildren. Wyatt said CPS showed up on their doorstep with four kids. The youngest, six months old, arrived with a broken leg, broken arm and a broken collarbone.

Wyatt said they pulled resources for the family, including a basket made by the men in the Moses Project.

She said the basket meant the world to those grandparents and that baby.

“That baby is in a safe place with her Moses basket,” she said. “It was a safe place for her to recuperate. Now she’s outside and playing.”

“It speaks legacy,” she added.

The Moses Project makes hundreds of blankets for local kids and local charities.

It impacts those who make the blankets and those who are receiving them.

Many of the men are learning a new trade, organizational skills. It could mean a new job and a life lesson.

To Paige, who could get out of prison on early release in the next eight months, he looks to take the spirit of giving outside the prison.

His goal is to make blankets for fellow veterans in the hospital, he said. He’s got 501c3 intentions, and he hopes he can apply the craft he’s learned at BCC to his own charity one day.

“I just want to keep helping,” he said. “They’re taking care of the kids, maybe I can take care of the veterans, give them a blanket.”

Bridgeport Correctional Center is accredited by the American Correctional
Association—achieving 100% compliance for both mandatory and non-mandatory
standards in its most recent audit. Other accreditations and certifications include the
Correctional Education Association and the Prison Rape Elimination Act (PREA).