Part I: Preparing Women at the Gadsden Facility for Jobs

Video Shot Prior to COVID-19 Pandemic

Nikki Clark is a local hair salon owner who offers her expertise to the Gadsden Correctional Facility, which offers a cosmetology program to its all-female population. 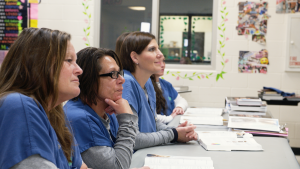 “A lot of the schools that are out there,” she says, “aren’t teaching as much as they’re getting here.”

Emily Paul is in the program.

“I think having access to vocations,” she says, “and particularly this one, has been a blessing. It’s been a godsend for me, because it’s actually giving me and others an opportunity to where we can actually thrive on the outside.”

“When I came to ‘cosmo’,” explains another student, Fisthnise Saint Breux, “I knew I wanted to do just hair. However, upon me continuing to learn and continuing to grow, I learned I can do a lot of it. So, therefore, my business, which I plan on having upon my release, will be a full salon.”

Johnalyn Head is an instructor. 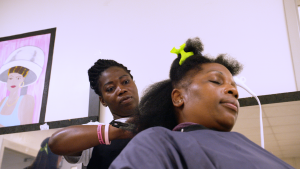 Nikki Clark agrees, “They’re equipped to go out into the real world and actually do hair, and I love it that you guys get them ready for the tests. They’re actually able to take the tests to be licensed. So, there’s no reason that they couldn’t go out and find a job.”

The program has a track record of achievement beyond the walls of the facility. Former resident graduates are often known to launch successful careers in the cosmetology industry.

“[I] actually had one of the ex-offenders here send me a letter stating how she was chosen, she was a graduate of our cosmetology program, she was chosen as the cosmetologist of the area in 2019 in South Florida. So that was very impressive. And stories like that make you feel good.” 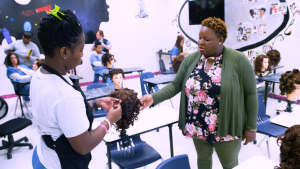 “They call back and they let us know that ‘this place is hiring, this place will hire them’, and some of them have actually become managers. So, they’ve called and let me know ‘I’m a manager now at a local salon over in so and so, and if anyone comes in this area, just let me know and I’ll hire them.”

“I have to say I’m so impressed with the program,” says Nikki Clark, “and even the beauty of the classroom is amazing. I can tell there’s a lot of heart and soul that’s put into this. It’s pretty amazing. You’re giving people an opportunity to make a great life and do better and do things for the community. And I just think it’s wonderful, I really do. I don’t see any way you could serve better than what you guys [do] here.”