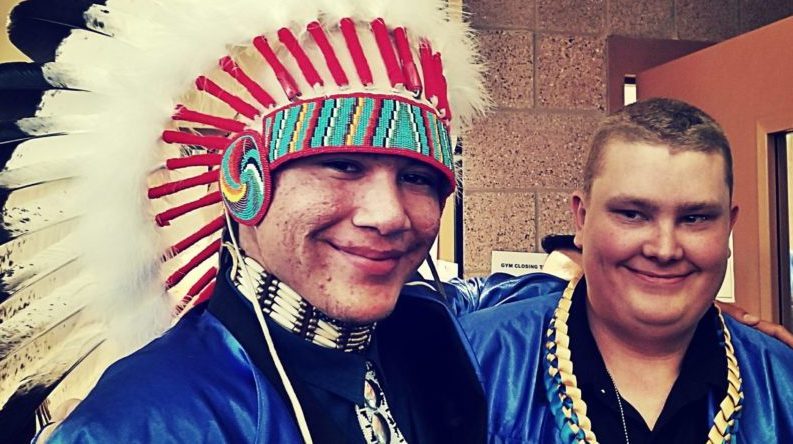 NEWS: A Day in the Life of a Job Corps Graduate: Teton Trosper

(Riverton, Wyo.) – Wind River Job Corps held its fourth graduation ceremony last Friday since its opening in August of 2015, celebrating the accomplishments of over 48 students. Among those who graduated was Teton Trosper, a young man from Fort Washakie, Wyoming who attended WRJC as a residential student and completed the program in under a year.

Trosper dropped out of High School during his Junior Year so that he could begin working to support his family, obtaining employment as a landscaper in Jackson Hole, Wyoming. After losing his job, he felt a lack of direction and didn’t know what to do next. Trosper learned about the program from a friend of his who had recently been separated from the program, prompting him to meet up with a recruiter that same day.

Trosper was attending classes around three weeks after meeting with a recruiter and was working toward a better life for himself and his family by means of a CDL that would allow him to pursue work as a truck driver.

A Day in the Life of a Job Corps Student

A typical day for Trosper started at 5:00 AM with the completion of his dorm chores, then he’d hang out with his roommates, helping them to get up on time. Working as a team was important to Trosper and he held his connection with his roommates very highly, saying that the group would eat breakfast together every morning.

Vocational Trade Courses begin at 8:00 AM every morning, Trosper expressed vast enthusiasm when speaking of his time in trade saying “I love Heavy Truck Driving. Driving those trucks is so much fun! A dream come true!”

“My instructors were amazing, Roy and Dewey, I look up to those guys, they were great. They taught me everything I know about trucking. Before I came in I didn’t even know how to drive a stick shift. I went from that to driving semis!” said Trosper, excitedly.

The center allows students to bring video game consoles onto center, which Trosper took advantage of, but made it a point to go on as many “Rec Trips” as possible, speaking about his love of hiking in local mountains and his appreciation for the center sponsored trips that would take groups of students to hike the falls above Lander, take them swimming, and go to movies and other community events.

Before attending the program Trosper says that he was not a “sociable” person, rarely diverting from his routine of life at home, school, and work. Trosper expressed gratitude for the exposure he received to different cultures, saying “when I got to Job Corps it just opened up a whole new variety of people that I got to deal with. It was great, I got to see new cultures, learn new languages, I even took a Japanese class at Job Corps, I loved it!”

When asked what the other students were like, Trosper said that “a lot of them had some growing up to do, but that’s why they came to Job Corps. We all came here to learn something and do something with our lives. I always felt like I needed to help people, so I took my dorm leadership position seriously.”

“If someone was having a bad day, I would go sit down and talk to them. If someone was angry and about to get into a fight, I would calm them down and get them out of the fight,” Trosper explained.

Trosper received a High School Diploma, Class A CDL with Airbrake Endorsement, and OSHA Certifications at graduation and hopes to secure employment with the help of his instructors who have reached out to personal contacts in the industry to assist him in making connections and getting in on some exclusive opportunities. Trosper wants a job that allows him to travel across the country while he works, and he feels that Job Corps has been key in his pursuit of that career.

When asked about the personal changes that the program brought out in him, Trosper said, “Well, I definitely wake up sooner. The old me, you wouldn’t catch unless the sun was down. Now I’m up before the sun, so that’s different. I feel like I’m a little bit more laid back than I used to be, and I am definitely a lot more focused, I’m not about that whole party scene anymore. I’m just here to get my job done so I can make money for my family.”

Graduation meant that all of his hard work and sacrifices he made to get through the program finally paid off, “missing out on some things with my family, being able to put up with people who didn’t really care, and seeing those people walk beside me who I had tried to mentor really meant a lot to me. It was just a really good experience. It wasn’t just about me, it was about everybody who made it through, all of us, everybody in my group made it!”

Trosper plans to complete an additional trade before parting ways with the program in order to bolster his chances of finding and maintaining a job after leaving the program.

County 10 caught up with Julie Gassner, Center Director at Wind River Job Corps, to talk about the state of the Center as the program begins its third year of serving students.

When asked about recent media reports regarding the Center moving to a “Closed Campus” format, Gassner explained, “The day passes that students used to be able to go on have discontinued. They can still go on a weekend pass or personal leave, and we continue to take our students to the movies, to community activities, and to Wal-Mart to go shopping. The only difference is that they’re supervised.”

“We are going to be working on the Veterans Memorial Park, helping with the construction. Our Welding Students and Heavy Truck Driving Students recently helped move the old Skate Park from Riverton to Hudson. Our students are still doing great things to thank this community for its support.”

Gassner did verify that the Center changed its policies to allow students who are over 18-years-old to use tobacco products within designated smoking areas.