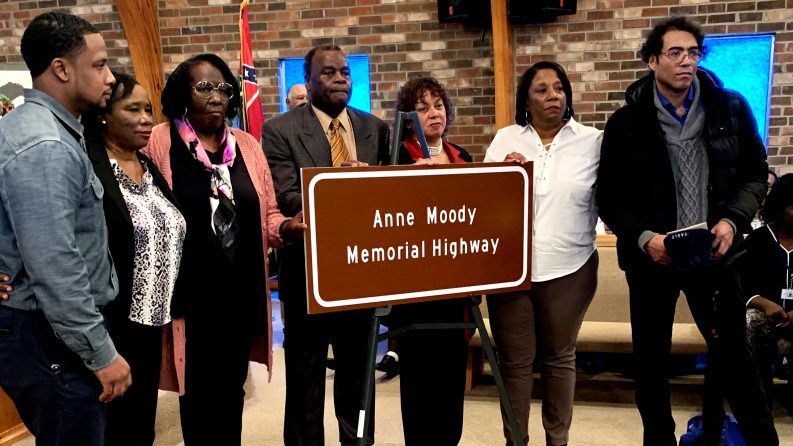 For video stories of the Anne Moody History Project, click below links

Portion of Hwy. 24 Named in Honor of Anne Moody

Years of hard work by a number of local residents finally paid off last week with the naming of Mississippi Highway 24 between Centreville and Woodville as the Anne Moody Memorial Highway.

An impressive ceremony with standing room only was held on Wednesday, February 20, at 10 a.m. at the church where she was a member – Mt. Pleasant Baptist Church.

The service was held to honor Anne Moody and to officially dedicate the 15-mile stretch of Hwy. 24 which runs between the Town of Centreville, where she was born and lived a good portion of her life, and Woodville.

Anne Moody was a civil rights activist and the respected author of the critically acclaimed memoir, Coming of Age in Mississippi.

She was born Essie Mae Moody on September 15, 1940, to Fred Moody, Sr., and Elmira “Too Sweet” Williams Moody in Centreville. Her parents worked for a time as sharecroppers on the Miller Plantation.

She was the oldest of 10 children, Anne, and her former husband, Austin Straus, were the parents of Sasha Straus.

She became an activist in the early 1960s while attending Tougaloo College. She was a member of the National Association of Colored People (NAACP), the Congress of Racial Equality (CORE), and the Student Nonviolent Coordinating Committee (SNCC). She participated in many historic nonviolent campaigns, including the Woolworth’s sit-in protest in 1963, the March on Washington in 1963 and the Voter Registration Project in 1964.

In addition to incarcerations, she endured physical violence and death threats in her fight for freedom, justice and equality for all.

During the hour-long program, a number of guests were presented and took part in the ceremony including Southern District Highway Commissioner Tom King, who acted as master of ceremonies.

Others on the agenda included the WCHS Honor Guard for the presentation of colors, Reverend LeReginald Jones, pastor of Mt. Pleasant Church, Dorothy Veal, who sang We Shall Overcome, State Representative Angela Cockerham, who sponsored House Bill 1153 which designated a portion of Hwy. 24 as the “Anne Moody Memorial Highway,” Dr. Roscoe Barnes, III, who gave a history of the Anne Moody project, Moody’s brother, Reverend Fred Moody, Jr., who provided an inside look at his sister, and Reverend Larry Lee, who gave the benediction.

Dr. Barnes, who is the chaplain at the Wilkinson County Correctional Facility in Woodville, spearheaded the drive to memorialize Anne Moody and to have a portion of Hwy. 24 named in her honor.

In Dr. Barnes’ talk, he outlined how the memorial project began, how it progressed and then praised the end result.

The Journey to the Anne Moody Memorial Highway

Dr. Barnes said, “I want to speak for a couple of minutes about the journey involved with today’s honor. In doing this, I want to look at some of the things that brought us to where we are.

“Some of you may be surprised to know that the idea for the Anne Moody Memorial Highway originated in a prison. Specifically, the dream of naming a portion of Highway 24 in Anne Moody’s honor was birthed inside the Wilkinson County Correctional Facility. The facility is privately managed by Management & Training Corporation or MTC of Utah.

“It all started in the spring of 2017 when I walked in on a conversation between my colleagues, Ms. Emma Taplin and Ms. Lavern Taylor. They were talking about Anne Moody’s contributions to the civil rights movement and her sacrifices in the fight for freedom and justice for all people. They also noted, with serious concern – and apparent sadness – that she had not received the recognition she deserved.

“We later spoke to our colleague, Ms. Ruby Dixon, and she agreed that we must act. After some brainstorming, we created the Anne Moody History Project as a community service endeavor to promote and help preserve the legacy of this civil rights pioneer. We agreed that our mission would be to keep her legacy alive.

“While we were certainly committed and quite ambitious in our efforts, we did not work in isolation. In fact, I can say without hesitation that some of our plans would have fallen short without the support of our elected officials and government agencies. For this reason, I want to acknowledge the support we received.

“We are grateful to the Centreville Board of Aldermen for approving, unanimously, our request for a Proclamation for Anne Mood Day on September 15, and for the resolution to rename Fort Street, Anne Moody Street.

“We are grateful to the Wilkinson County Board of Supervisors for approving our request for a resolution authorizing the state to name a portion of Highway 24 in Moody’s honor.

“We offer thanks to Rep. Angela Cockerham, Gov. Phil Bryant, Commissioner Tom King and the Mississippi Department of Transportation for making this dream a reality.

“And last, but not leaser, we express our sincere appreciation to the family of Anne Moody for their support and encouragement.”

“Anne Moody Memorial Highway” signs have been posted on Hwy. 24 in Woodville just east of the Hwy. 61/24 intersection.

On display at the ceremony were several pieces of artwork by WCCF inmates especially for the day; drawings of Anne Moody and places of interest which had a connection to her, and one of Rep. Cockerham.

At the conclusion of the program refreshments were served at the church.