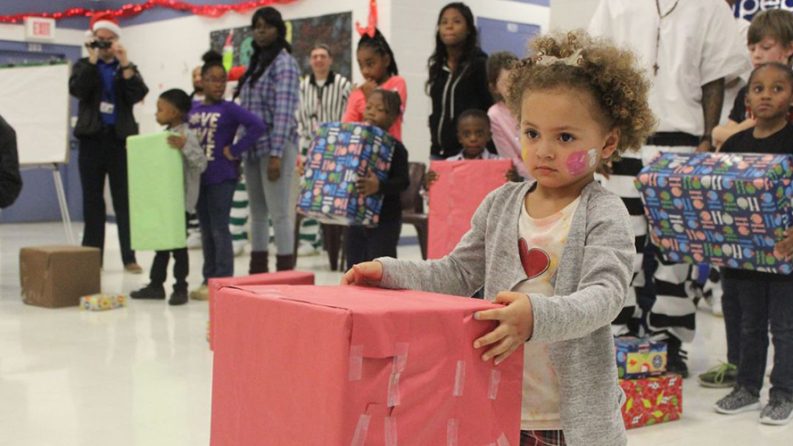 For the men incarcerated at East Mississippi Correctional Facility who can’t go home for the holidays, the “Day with Dad” program brought their family to them for a celebration on Friday.

“It means a lot to them,” Markeshia Wells, the lead case manager at the facility, said. “They look forward to it every time.”

Over a dozen dads painstakingly decorated the facility’s gym in preparation for their children and grandchildren, including a fireplace with paper logs and paper Christmas trees.

At a mini putt-putt golf course, dads and children jokingly accused each other of cheating or sat down at tables filled with coloring books. As part of the games, such as stacking presents or drawing snowmen, children won prizes like lip gloss kits or plastic baseball bats.

“In four years I’ll be 14,” 10-year-old Jeremy Landon said. “My dad will be out in four years and he can be home for Christmas then.”

Another family said it had been 10 years since they’d spent Christmas with their dad, making the day’s activities special.

“It’s been really fun to spend time with my dad,” Chris Hughes said.

Wells said that men at the facility saw the joy the program brought the fathers and now had a waiting list of other dads wanting to join. Men can only qualify for the program, however, if they have a job, participate in their classes and haven’t received a write-up for a full year.

“They go back and tell the other felons about it,” Wells said. “Because it goes beyond the normal visitation.”

These special events, held on every fifth Saturday brought more than smiles to the faces of the children.

“One of the men said it gives them hope,” Wells said.