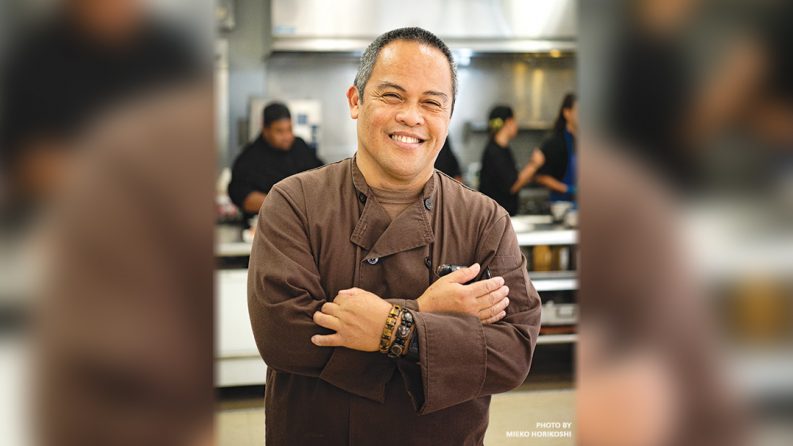 “Humility and passion. Those are the two most important personal traits that I look for in my students. Everything else can be learned.”—Chef Larry Tuzon

“Okay,” Chef Larry Tuzon announces to his students, “these are the people you’ll be cooking for today, and they know food.”

“They” are photographer Mieko Horikoshi and I, and we’ve come to watch Tuzon in action: teaching professional culinary arts to young people who have taken a nontraditional path.

A 1981 graduate of what was then the University of Hawai‘i–Maui Community College’s Culinary Arts Program, Tuzon spent six years working as a line cook at Kapalua Bay Club, then moved to the Maui Prince Hotel in Mākena as part of its opening team. Other positions followed: at the Four Seasons Resort Maui, Charley’s Restaurant in Pā‘ia, and the college’s Culinary Arts Program. Each step along the way honed the culinary, teaching and managerial skills Job Corps would demand, and led him to his passion: crafting personalized training for young people, and guiding them with innate patience and understanding.

Funded by the U.S. Department of Labor, Job Corps offers academic and vocational training in more than 100 fields to young people sixteen to twenty-four years old. It’s the largest free residential training program in the country—but “free” doesn’t mean easy. Larry’s students come from Hawai‘i, Yap, the Marshall Islands, Palau, and other far reaches of the Polynesian triangle. For some, English is a second language. And although students learn at their own pace, academic skills are evaluated every two months. Larry incorporates those requirements into a rigorous culinary training program. For example, creating their own recipes and standardizing measurements gives students practice in English and applied math; understanding how baking soda affects ingredients in baked goods is a useful lesson in science. “They need to reach a certain level before they graduate,” Larry says. “They hold themselves accountable to reach these goals.”

As they plate and present their dishes, each student describes his or her contribution to the lunch. A beaming seventeen-year-old Marshallese named Peterson Basin tells us about the bread rolls just as I break one in half, breathing in the sweet richness of the dough that he baked this morning. “It’s got flour, eggs, butter, sugar, yeast and milk in it.” When Chef Larry asks him to share his story about joining Job Corps, Peterson admits he had difficulties in adjusting to its stringent academic demands, but the culinary program made it all worthwhile. He adds, simply but exuberantly, “I want to be a baker.”

Jovalee Augustine, from Palau, and Jyra Yibuw, from Yap, have been accepted into the San Francisco MTC for advanced training. They confidently explain what they’ve prepared. “My dish is an Asian salsa with shiitake mushrooms and it is served on the grilled ‘ahi,” says Jovalee. Jyra follows with, “I made the fresh papaya salsa and it is garnishing the Cajun-spice seared ‘ahi.” As I listen to the presentations, I marvel at the enthusiasm of the students, their poise and humility.

In 2018, MTC named Larry Tuzon Instructor of the Year, an award that recognizes exceptional service to Job Corps students. Marshall Norman, site director for Job Corps Hawai‘i’s Maui campus, announced the honor, saying, “Larry has the heart to see the marginalized and at-risk become leaders and experts in the culinary field. His approach to learning and student develop is inclusive of all students, regardless of their gender, ethnicity, learning capacity or disability . . . [treating each of them] with the utmost respect, fairness, and gratitude.”

His students have a more boisterous way of praising their mentor. Before Mieko and I depart, I ask, “Is Chef Larry a good teacher?” The question raises a happy hubbub: “He’s the best!” “Chef is the bomb!” “He cares about us!” “We love Chef Larry!”