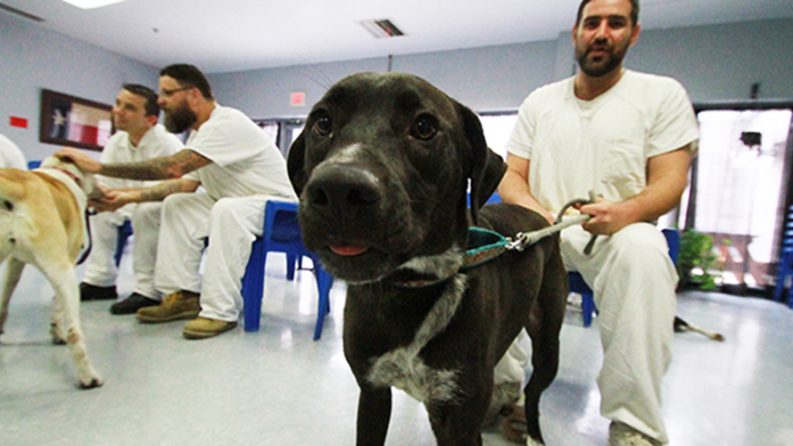 A sense of pride filled the mind of Kyle Correctional Facility offender Slade Windsor as he and his dog, Buck, prepared to show the fruits of their labor.

Eight weeks ago, Windsor and his cell-mate first met Buck, a shy lab mix that didn’t want to interact with anyone.

Through the PAWS of Central Texas Cell Dog program, Windsor and his “cellie” trained Buck to leave his emotional shell and prepare for life in a new home. Windsor showcased those skills by getting Buck to follow a series of commands during a Feb. 5 graduation ceremony.

“It helps you to come back and center yourself and getting in the mindset of slowing down and doing what you have to do. You also have to understand you have obligations. When it gets hard and difficult, you want to quit. But you have someone that’s depending on you, so you have to step up.”

For offenders in the Cell Dog program, getting to work with their four-legged friends offers more than a glimpse of life outside the prison walls. It also helps them learn the soft skills needed when they return to society.

“It’s beneficial. It helps you learn responsibility and gets you ready for society,” said offender Augustin Lopez.

Dori Naiver, a resident trainer with the program and a dog trainer for over 40 years, said the Feb. 5 ceremony was the second set of dogs that graduated through the program, which has been operating for roughly five years.

Cell Dogs, which lasts about eight to 10 weeks, allows PAWS to introduce 10 shelter dogs to 20 offenders. Dogs in the program are trained by the offenders, who team up to interact and care for the dog during that time frame.

Naiver said some of the dogs will have forever homes once they graduate. Several of the dogs are ideal candidates to become either therapy or service dogs in the future.

Some of the dogs are placed into a foster home, while some go back to the shelter to find their forever home.

Outside of classes, offenders care for the animal and are allowed to take supervised trips in the prison yard with their dog during specific times of the day. Buford said it is a challenge as offenders must also time a dog’s outdoor time to correctional facility shift changes.

Offenders must also learn patience when dealing with their dogs, which often are still puppies. Buford said life in the facility is new for many dogs, who aren’t used to those sounds.

Buford said the challenge almost led him to drop the program, but he was pushed back in by Naiver, who taught him to fulfill his obligations and stick it out.

“It helps you to come back and center yourself and getting in the mindset of slowing down and doing what you have to do,” Buford said. “You also have to understand you have obligations. When it gets hard and difficult, you want to quit. But you have someone that’s depending on you, so you have to step up.”

Seeing changes in offenders’ character traits when they work with a dog is a sign of the program’s success, Naiver said. Those traits include problem solving, empathy and teamwork.

Melody Hilburn, PAWS of Central Texas executive director, said many offenders have never experienced the unconditional love they get from the dogs in their own lives. Those experiences often come out during graduation ceremonies.

“When you get locked up for a while, you become hardened. You have to put up a lot of walls to put up with day-to-day things,” Naiver said. “They have to let a lot of that come down. The compassion and empathy for others, as well as teamwork.”

While there’s some sadness in seeing the dogs go to new homes, Windsor said getting the chance to bond with their canine buddies makes “me feel more like I’m at home.”

“It’s more relaxing than fighting in prison,” Windsor said. “It calms everyone down and gives you a sense of purpose, rather than just being in prison.”