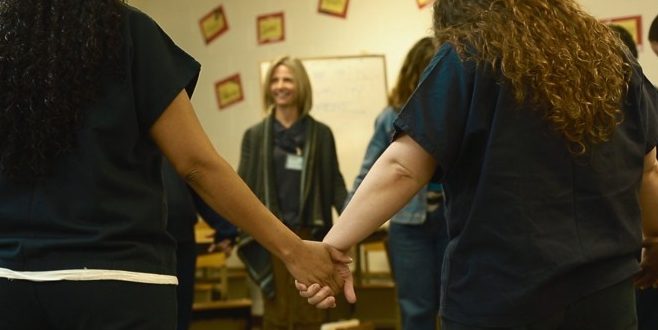 Across the country, studies have demonstrated a link between traumas such as physical and sexual abuse during childhoo and mental health and behavioral issues that lead to incarceration.

The problem is especially acute among women, with 73 percent of female inmates reporting mental health issues in state prisons according to the Bureau of Justice statistics.

As a volunteer in the prison system for seven years, Katie Ford saw this play out over and over again. She volunteers at the Lockhart Correctional Facility with an Austin-based nonprofit called Truth Be Told, teaching women inmates to tell their personal stories in a way that helps them come to terms with their situation.

“A common thread among their stories was that of trauma and abuse,” said Ford, “and almost inevitably it was physical or sexual abuse in the home when they were a child,” she said. “When they came of age to deal with the pain, they turned to alcohol and controlled substances. They were numbing out.”

In fact, the most common crimes committed by inmates at the Lockhart prison are driving while intoxicated and possession of a controlled substance.

Ford wanted to address that trauma more directly to give women a chance to change their lives. That’s when she met Robin Cullen, who told her about a program called “Healing Trauma.” Created by a clinician, Stephanie Covington, the program was piloted in Connecticut, where it proved to reduce trauma symptoms and rates of depression among women inmates.

In her 10 years as a facilitator of the program in Connecticut, Cullen said, “When women find an explanation for what’s been going on with them and they realize there’s a way out, it makes healing possible. It gives them hope.”

Ford worked with the wardens at the Lockhart prison, which is privately run by Management and Training Corporation, to bring the program there. While the corporation does not fund the program, Ford was encouraged to seek donations for the program by operating as a nonprofit.

“We are very supportive of the trauma program and believe it will help women heal from the tragic wounds of abuse, “ said Lockhart Warden James Frawner. “As the healing process begins to set in, these women will be in a much better position to take advantage of the many other rehabilitation programs offered at Lockhart, including Alcohol Anonymous.”

Right now, Ford serves as the facilitator of the program, training four other volunteers to lead the program as well, all while she tries to raise money to fund it.

In July, she welcomed her first class of 12 women to participate in the six-session program, and over six months she plans on serving more than 100 women at that facility. Each session covers a different topic, starting with giving them an understanding of what trauma is and how it reprograms the brain, to understanding healthy relationships and the basis of their own anger. They also learn self-soothing techniques to help them better respond to the emotional triggers that lead to negative behavior.

Ford says she asked the women in her class to practice the techniques between sessions, and she found that not only were they practicing, they were teaching the techniques to their bunkmates and friends.

“I didn’t anticipate how strongly the program would resonate with the women and how hungrily they would embrace the tools,” she said. “It feels like I’ve brought ice water to women in the desert.”