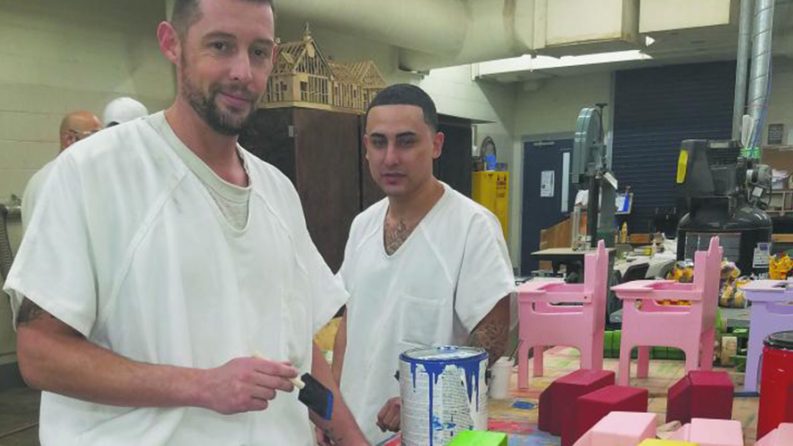 NEWS: Inmates Learn new skills and give back

Additional reporting was done by Latricia Powell.
VENUS-The North Pole wasn’t the only location with a toy workshop this holiday season. The Sanders-Estes Unit, owned by Management and Training Corporation, a privately-operated correctional facility about 20 minutes southeast of Burleson in Venus, was the site of inmates finding the joy in making toys for kids this past Christmas.

Sanders-Estes holds about 1,040 inmates and provides prisoners with many opportunities to better prepare themselves for when they have served their time and are released. While just about every prison offers a GED program, Sanders-Estes offers programs such as computer technology, food services, electric and building trades. However, the most popular class is woodworking, taught by Dennis Porterfield.

“What I liked about doing the toys, I know there are a lot of dads in prison right now that can’t give nothing to their kids for Christmas,” inmate Jairo Garza said. “That’s what motivated me. I know how it feels to not be able to give anything to your kids for Christmas. I have a little boy and a little girl. I thought about my kids a lot when I made these toys.”

The toys that this group of inmates made went to children who are currently in the care of Child Protective Services.

“It was a great feeling to male toys for kids who needed them,” inmate Christopher Knox said. “It’s nice to give back. And these kids are also separated from their families, which is what we are going through, too. It gives me a good feeling.”

Most of these inmates have children and families waiting for them on the outside and all said the holiday season is especially hard when you are locked up. One inmate and a partner made about 50 wooden helicopters, which they then painted.

“I found out that one of my sons got one of those helicopters last year,” said inmate Colby Englemann. “That was a rewarding feeling.”

Englemann said the class is also helping him prepare for the future when he gets out of prison.

“It ain’t just about carpentry,” he said. “We learn everything from pouring a concrete slab, to framing windows, putting up doors, electrical, plumbing, blueprint reading, the whole nine yards. I live on a ranch, so it’s really going to help when it comes to fixing up barns and things like that. I could even get a job because I’m now licensed, and the safety training we go through helps us get our foot in the door. I’m fortunate to be in this class.”

The men that the Star interviewed all agreed that having something to occupy their time while behind bars has made serving their time easier and cuts down on fighting.

“They’ve had as many fights here in 10 months as they had in one week at my last unit,” inmate Mason Kellner said. “I thank the good Lord every day that I am here and not somewhere else.”

Kellner recounted how inmates at other prisons he has served time in have not been treated as well as they are at Sanders-Estes.

“In TDC (Texas Department of Corrections), I was talked to so bad I just wanted to rebel,” he said. “I had no respect for any of them (correctional officers) at all. In TDC, in the Panhandle (of Texas), they’ll have you standing outside in the sleet, snow and ice stripping down in a line of 50 men just to be malicious about it. These folks here, they aren’t like that.”

Kellner said the atmosphere at Sanders-Estes makes inmates think more positively about how they will change their life when they are released.

Kellner was a cowboy and helped run a feed-lot and livestock sale barn in the panhandle of Texas before he went to prison. He said when he gets out, he plans on going back to being a cowboy, but wants to keep the woodworking up to help keep himself “out of trouble.”

“I made a set of dominos for my mom recently,” he said. “It was all handmade and it occupied about a month of my time. So I think that will be a good hobby for me to do at home.”

“I have a career on the outside at Christian Brothers Automotive, but I was tired of sitting in the day room,” Cieminski said. “I’ve been in five units and this one offers the most classes out of them all. The more you sit around in the dayroom, someone says something and it irritates you and causes fights. Getting out (and going to classes) changes your whole aspect of being here.”

Bobby Avara is a correctional officer at Sanders-Estes and said that the inmates in the woodworking class were all well-behaved.

Next week, check back for an interview with Dennis Porterfield, the instructor who helps these inmates turn their lives around.