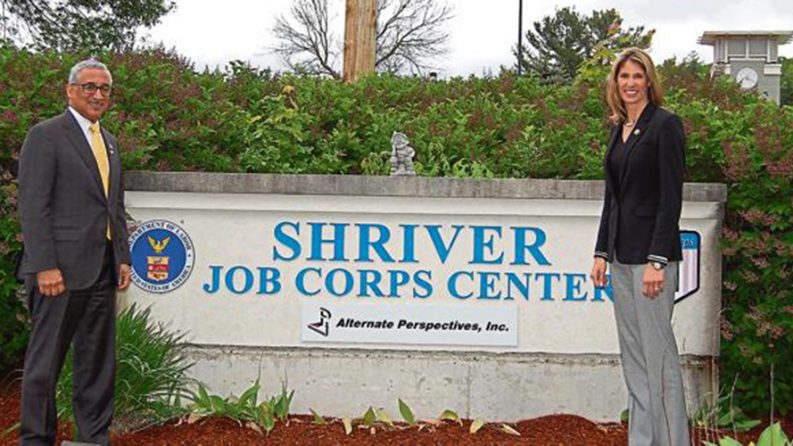 NEWS: Jobs front and center for tour at Devens site

Trahan stresses the importance of mission

This was one stop on the congresswoman’s visit to the district before later hosting a roundtable discussion with Scott, local labor leaders and public officials at the headquarters of the Local 509 Service Employees International Union in Marlboro.

The Democratic congressmen toured the center to observe how the organization teaches people ages 16 to 24 training in careers, technical skills and academics.

The Job Corps program comes courtesy of the U.S. Department of Labor and its authorization through Title I-C of the Workforce Innovation and Opportunity Act of 2014. Attendees have the option of living at the campus on Jackson Road while learning vocational skills including car repair, finance, health care and information technology.

Trahan is also a member of the Education and Labor Committee, along with the subcommittees for Higher Education and Workforce Investment and Health, Employment, Labor and Pensions. As a member of said committees, Trahan has been focused on closing the gender pay gap, raising federal minimum wage, making higher education more affordable for residents and increasing job training programs like Shriver.

“I’ve long admired the Shriver Job Corp mission,” Trahan said after the tour. “It’s a great investment in young people who are looking for economic opportunity. It was great to see the automotive department, the carpentry department, it was cool to see those paths open up for young people.”

Trahan added how she spoke to a few of the students attending, including twin brothers in the automotive program who told her they planned to attend an advanced program at another Job Corps in Utah.

“They want to get the advanced skills because they understand the difference there will be in salary and opportunity,” she said. “It was really impressive to hear all the stories.”

In addressing the importance of Shriver, Trahan said the organization provides immediate local job opportunities for local residents. She specifically noted how Keolis Commuter Services had hired students out of Shriver’s own transportation communication program to work in positions related to passenger assistance. Trahan added how Keolis also promotes those students through the company.

“That’s always great, when you have industry partnering with a Job Corps Center like this or a trades program or a union apprenticeship to say, ‘Let’s get these kids into the workforce, let’s get them what they need,'” she said. “We’re fighting for funding. This administration wants to cut funding by $850 million, we’re fighting to increase it because we know that these programs work. They’ve worked for decades.”