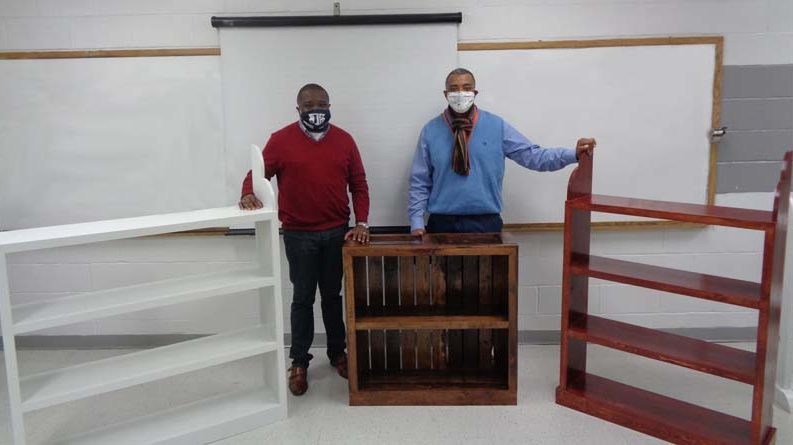 WOODVILLE, Miss. – Through a project called “Operation Varnish,” Wilkinson County Correctional Facility (WCCF) is building bookcases for every classroom in the Wilkinson County School District (WCSD). The first 25 will go to William Winans Middle School (WWMS) in Centreville, Miss., according to Investigator Michelle Higginbotham, who coordinated the project.

“We appreciate the partnership that we have with the school district and we’re excited about this particular project,” Higginbotham said. “We believe this will have a lasting impact on the schools. As permanent fixtures in the classrooms, the bookcases will have value for the teachers and students for years to come.”

Helping the school district in this way is one of the facility’s most ambitious projects to date, in terms of community service, according to Warden Scott Middlebrooks. He said the facility aims to provide bookcases and other woodwork for each of the schools in the district.

“If they need something that’s made of wood, we can make it,” he said, adding the contribution is substantial and will have long-term benefits to the district. “We’re doing this for the students. We want to show that we care about them and our local community.”

The project is being combined with a literacy campaign in which books will be donated to the schools along with the bookcases, according to Deputy Warden of Programs George Castro. He said the inclusion of books is one of several things WCCF is doing to commemorate the 40th anniversary of MTC or Management & Training Corporation, the Utah company that manages WCCF.

The project is the first of its kind. Its name, Operation Varnish, was suggested by a WCCF offender. Its aim is to supply the school district with handcrafted wood products that meet a definite need. In addition to bookcases, Operation Varnish will entail the construction of benches and lockers for the Wilkinson County High School (WCHS) football team, according to Higginbotham.

The work is being done by WCCF’s Facilities Care program under the leadership of Instructor Larry Jackson. He said the project is a good opportunity for the facility to showcase the talent and woodworking skills of his students, which include Fred Doss, Kendrick Casey, Bobby Walls, Quincy Fox, Riley Todd, and Lawrence Reed.

Bradford and Ross said they were more than impressed by the bookcases.

“All four of them are really nice,” said Bradford. “We are very appreciative, and I commend the men for this excellent work. We are grateful to you for what you’re doing to help our children.”

“This is ideal for the classrooms and it fits the decorum of the school,” he said.

“Our guys are very talented and they enjoy doing this,” said Middlebrooks. “If it’s made of wood, we can build anything you need.”

In addition to helping the schools, the men are honing their skills for finding jobs when they reenter society, according to Programs Director Tracey Arbuthnot.

“It’s amazing what they are able to do with those pallets,” she said. “Who could tell by looking at them that these bookcases were constructed from discarded pallets? You can’t.”

How idea was born

The idea for the project originated during a discussion between Middlebrooks and Higginbotham. WCCF had donated $1200 to the school district and 400 clear plastic water bottles to the middle school, which were valued at $500. Higginbotham suggested going a step further by building and donating the bookcases.

When Middlebrooks talked about the type of wood that could be used, he said Higginbotham took the idea and ran with it. She ended up on Pinterest where she found examples of bookcases made from pallets. And the rest is history, he said.

“We’re glad Michelle came up with this idea,” Middlebrooks said. He assured Bradford and Ross that the donation of the bookcases is not a one-time project. Rather, he said, it is something that will continue.

“I’m so glad we’re partners with you,” said Bradford.

“And we’re also glad to be partners with you,” Middlebrooks replied.

WCCF, which houses more than 900 male offenders, is operated by Management and Training Corporation or MTC of Utah.