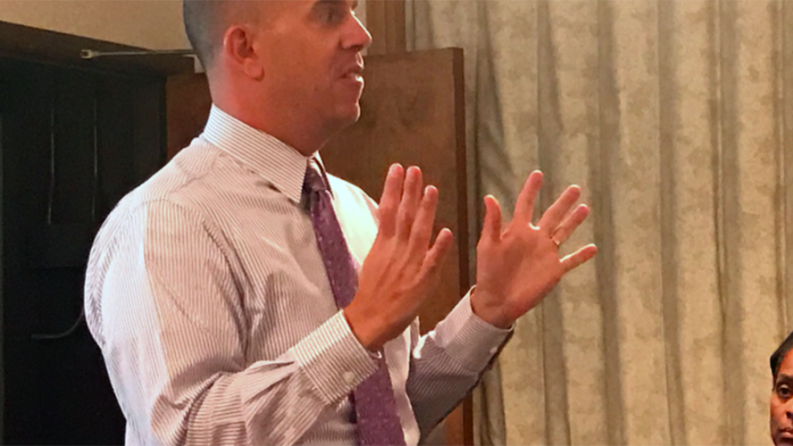 (Riverton, Wyo.) – Taxpayers expect to see positive outcomes when their money is spent by the Federal Government, and in that respect, the Wind River Job Corps Center is providing a very good return on investment.

The new director of the center, Jim Whitmire, who took over the top job at the Riverton center this past week, said the local job corps center has been in existence long enough, two years, to see positive results. “We are seeing our graduates leave the program and the report card is outstanding,” he told the Riverton Economic and Community Development Association Wednesday morning.

“All 125 job corps centers in the country are scored on their respective graduation rates, placement of those graduates, the wages that they earn and if their jobs are full or part time,” he said. “Then we are scored again in six months and a year if those graduates are still working in the field they were trained. I’m happy to report the Wind River Job Corps Center, by those standards, is very successful.”

Whitmire said Wind River is the top center in the country on three marks; job training, graduate placement and the average wage earned by a graduate. “We’re fifth in our placement of full-time jobs,” he said. “That tells me that the training programs offered here are needed and that our students are leaving well prepared to obtain and hold a job.”

State Senator Eli Bebout called the results, “incredible.” He said those statistics also indicate that the students entering the job corps center are wanting to make themselves better. “It’s slow in the state right now, yet to have that kind of placement is incredible.”

Whitmire, originally from Pennsylvania and most recently from a job corps center in Iowa, said that most of the graduates return to their home area and find jobs there. For the local center, 47 percent of the students come from Wyoming. Of those, seven percent are non-residential, meaning they leave the center each day and return again the next morning, staying at their local homes.

The center has a current population of 174 students with an average age of 19.5 years. “These students come to us on their own free will. They are not adjudicated to come here,” he said.

Whitmire also said the young people being trained at the job corps find themselves in a good market. “The time is ripe to get the skills and go into the workforce as the baby boomers are leaving the workforce,” he said.

The new Wind River Director also noted that students are coming into the center and graduating every week. “We have open enrollment. Our programs are competency-based,” he said, “they are based on the skills they possess and what they can demonstrate. It’s not based on classroom time.” Whitmire said most students complete their skills training in one year, but they have two years to complete, and if they want to attend college, they can have a third year.” The average length of stay for a Wind River Job Corps graduate was said to be 300 days.

While the center has not yet reached it’s designed capacity for 300 students, Whitmire said a new approach to student recruitment is now in place. He said the effort will be coordinated by a new hire in Cheyenne and that current recruiters are on the job in Riverton, Rock Springs, Casper and Cheyenne.