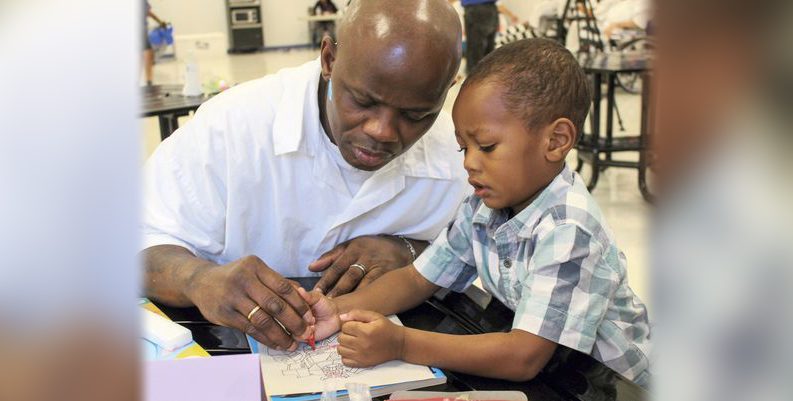 MERIDIAN — Bo Easley hasn’t seen his father since 2012. The 8-year-old boy lives in Arkansas and his father has been incarcerated at the East Mississippi Correctional Facility since Bo was 3 years old.

Bo recently made the six-hour trip with his twin and mother to visit his father for a Day with Dad, the first-ever event at the prison to allow dads and children a chance to bond over food and games.

“Some of the parents haven’t seen their kids in a while,” Markshia Wells, the facility’s manager who spearheaded the program, said. “I have one guy that hasn’t seen his kids in six years. They traveled all the way from Arkansas to see him. So, it was a bonding experience because some of the guys haven’t bonded with their child since they were incarcerated. It’s all about building back up that relationship between the parent and the child.”

Bo smiled shyly as he talked about his day with dad: creating Play-Doh “worms” and painting a smiley face on his dad’s forehead.

In this Sunday, July 30, 2017 photo, Madilyn Allen smiles as her dad, Brad Allen, fills in a ‘LOVE’ stencil at the East Mississippi Correctional Facility’s Day with Dad in Lauderdale County, Miss. (Photo: Whitney Downard/The Meridian Star via AP)
Ray Rice, the deputy warden of programs, asked that fathers only pose for photos and videos but not participate in interviews. Most dads seemed emotional, greeting their children and playing with them for the first time in years. One boy, about 11, hugged his dad and quickly hid his face on the table so no one would see him cry.

Brothers Meciah and Elijah Morgan waited to see their father, Matthew Morgan, after a trip from Tupelo. Though they visited often, they still looked forward to Dad’s frequent calls to talk about school and their baseball games.

Their maternal grandmother, Carrie Thompson-Buse, said that the two lived with her but that their father had his first opportunity for parole next year.

“It’s important to me because I know how important their relationship is with their father,” Thompson-Buse said. “He’s been in prison for six years and is coming up for parole next year. For a long time they didn’t even know that this was a prison… they thought he just worked here — in this big building with wire stuck around it. They just didn’t understand until a couple years ago when I felt like they were old enough to know.”

In this Sunday, July 30, 2017 photo, Chrishunna Bennoman focuses on painting the face of her dad, Christopher Bennoman, at the East Mississippi Correctional Facility in Lauderdale County, Miss., at the Day with Dad, an event bringing inmates and their children together. (Photo: Whitney Downard/The Meridian Star via AP)

When dad finally came into the room, 7-year-old Elijah sprinted across the floor, jumping into his dad’s arms for a hug.

“They’re 7 and 8 now… maybe a positive experience can come from this experience that they’ve both had to go through,” Thompson-Buse said, staying on the sidelines.

Later, the boys played a “Mirror-Mirror” game with their dad, copying each other’s movements, including pushups and jumping jacks, and each won a small toy.

Throughout the day children, from age 3 to teenagers, and their dads bowled, played bingo and Legos, read books and painted faces.

Wells decided to bring the program to East Mississippi after she saw other Management and Training Corporation, or MTC, facilities put together programs that bring dads together with their children.

“They’re overwhelmed,” Wells said about the children and fathers. “We all shed some tears and it’s going to be an ongoing thing.”

To qualify, dads had to be demerit-free for a year, be involved in MTC programs, actively participate and demonstrate good sportsmanship, Wells said.

“This is our first time. We felt like it was needed for these guys that are in programs. MTC is all about programs and these guys have done everything they can possibly do. We wanted to reward them with the opportunity to have a little-more-than normal visitation where they can play games and get to know their children a lot better,” Rice said.

Even employees who helped coordinate the event couldn’t help but get emotional during the day, crying and laughing with the families.

“We hope this will lead to other offenders seeing this and wanting to get involved,” Rice said. “Next time it might be a group of 15 other offenders … but we’re going to try to get more people involved. As many as possible.”