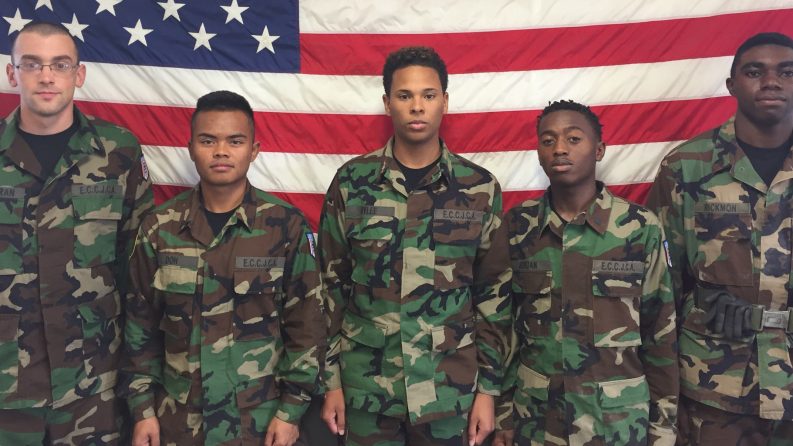 The Earle C. Clements Job Corps Academy pre-military program reached a new milestone! For the first time, students from the program will enter each branch of the United States military during the same time period: Army, Navy, Air Force, Marines, and Kentucky National Guard. Read how Job Corps has impacted these students. Eladeo Jordan graduated from the tile-setting program. He’s headed to Ft. Jackson, SC then to Ft. Lee, VA for advanced training. He says, “I was in high school not doing well but enough to get by. My granddad and I had a serious conversation about my future. I was behind in credits, and he told me about Job Corps.  I always wanted to go into the military, so I got my high school diploma here at Job Corps, and I am now going into the Kentucky National Guard. Job Corps gives young adults a second chance at life.”

Selena Camp Stevens completed the network cabling program. She’s currently training at Ft. Jackson, SC and then will receive advanced training at Ft. Lee, VA. Selena says, “I came [to Job Corps] with my boyfriend. It was his idea!  I planned for college after Job Corps, but the military offered free college. I would tell others to come to Job Corps, get what you need, stay focused, and you will be successful. Most students here don’t have a lot—but they have Job Corps. This is a second chance.” . Kaleb will depart for Great Lakes, MI then to Meridian, MS for personnel specialist training. Kaleb eventually wants to study mental health in college. He says, “I moved out at the age of 17 and couch hopped for two years. At 19, I was working two jobs and trying to get a GED. I struggled. I learned about Job Corps from a friend at church, and two things stuck out to me: the pre-military program and medical office training. I would not be where I am today without Job Corps. I have lost 30 pounds and am mentally and physically stronger now!” Ku Thay Doh Started his journey in a refugee camp in Thailand. He achieved his high school diploma in High Point, NC where he learned from a friend about Job Corps. He completed the welding program, and will train at Paris Island, SC. Ku Thay plans to serve in the Marine Corps infantry. He says, “A friend in Job Corps at Earle C. went into the Marines. I wanted to do the same. I learned the pre-military program could help you prepare for the ASFAB test.” Matthew will report to Lackland, Air Force Base, Texas for basic training. Matthew says, “I worked little jobs going nowhere. At Job Corps I earned my GED and UAW diesel mechanic certifications. I would advise young people interested to check out the program.”

Jaisun Rickmon is a UAW graduate, and is going to be a combat engineer in the Army. He will be in Ft. Benning, Ga then Ft. Leonard Wood, MO. he says, “When I was in GED classes at home, a National Guard recruiter told me about Earle C. Clements Job Corps. Job Corps allows young people who come from nothing or those who want to better themselves a start in a new life. After this, I see myself remaining in the military.” Asa Trudeaux completed electricity and network cabling. He is headed for Ft. Jackson, NC to train for missile launch repair in the Army. Asa says, “I was looking for employment online and came across Job Corps. I decided to go for job training. Job Corps is a good program. If you work hard, it will benefit your future. I believe Job Corps is a program that will help future generations progress to a positive society.”

Ramadan Brown is a medical administration graduate. He’s scheduled to leave on April 10 for Ft. Jackson, NC and then to Ft. Belvoir, VA for advanced training. He says,  “I came to Job Corps to change my life. It was a new opportunity I did not think I was going to get. Now I am going to serve my country in the U.S. Army food administration. If you come here to Job Corps, it is worth it. But, you need to work hard. Job Corps should not be cut. It would take away someone’s future.” Dakotah Reed is a nursing assistant graduate. She is currently receiving advanced training at Ft. Ruckers, AL. Dakotah says, “ I wanted on the right path in my life. I wanted something better. Job Corps was my opportunity, my stepping stone for my future. It has changed my life; going into the military. I am going into air-traffic control, and I am very, very lucky and blessed. I always wanted to do this. I always loved planes.”