He Thought He Would be a “Bum”, but Job Corps Set Him Straight 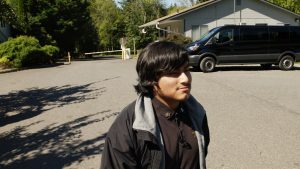 David Lopez is a student at the Springdale Job Corps Center in Troutdale, Oregon. He’s in the protective services and security trade.  Job Corps, David says, “Was the way to go.”

“It was an extremely good decision—that is putting it lightly.”

David grew up in Oregon. He lived with his family, whom he loves, but family life was not always perfect.

“It’s bittersweet and a bit chaotic,” he says, “and, it’s kind of the reason I’m here. I tended to recluse a lot. I eventually branched out and hung out with the wrong crowd.”

David dropped out of school and convinced himself a high school diploma really didn’t matter. That was then, now it’s a totally different story. He ended up earning a diploma at Job Corps and says, “I didn’t really know how to take it in at first. It was like ‘cool I got it [high school diploma].’ But the more I thought about it, the more I actually realized how much of a goal it was to me. I honestly didn’t think I was going to graduate; I would just be a bum somewhere and not do anything productive with my life.”

But David’s instructor, Keven Cheyne, reminds us that life sometimes has pleasant surprises.

“He’s earned his high school diploma. He is certified as an Oregon unarmed security professional. You know, one of the things I always tell the students is I’m looking for them to be polite and professional. And they need to try and be prepared for the industry. David’s great at working with other folks. He’s conscientious, he’s concerned about people, and he wants to help.”

David’s proud of his accomplishments, “I became a sergeant which is pretty much like a secondary teacher. I help make sure the class functions, and actually, I help direct people to their shifts and what not.”

So, for David…this is what Job Corps did for him. 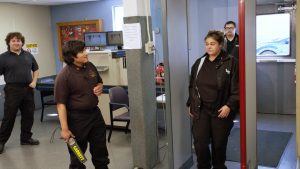 “It’s very important. And it helps a lot of youth. It helped rehabilitate me to be a more productive person. And, I know a lot more students who feel the same way. It’s helped a lot of people get better careers out of here. And it’s a really good place for youth to take advantage of.”