At this dealership in Evansville, Indiana, auto technicians have to be ready to go. Christopher Velazquez has been with Romain Cross Pointe Auto Park, a large dealership, for eight years. He loves his job. 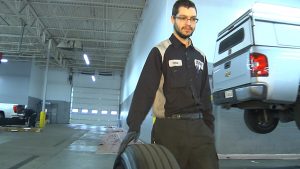 “It makes you so happy to know that you accomplished something; that you got another person out there on the road, so they can keep doing what they need to do.”

“You go to school, get your GED, get your high school diploma, learn a trade and be able to do something with your life. It’s a whole new start to life.”

Job Corps gave Christopher the confidence and job training to succeed in his career and in other—even more important areas of life.

“Words can’t even explain what it’s like being a father.”

Christopher and his wife have a two-year-old son. And he says his Job Corps experience prepared him for these big life events.

“Had I not been to Job Corps, I would have never met my wife. And I wouldn’t be here. I would not have a child. Job Corps was literally my start. Had it not been for Job Corps, I don’t know what I would be doing right now.” 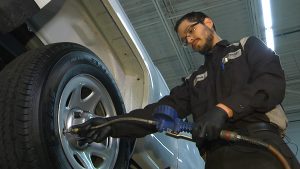 He remembers his instructors at Earle C. Clements Job Corps and what an impact they had on his life.

“If you want it, they’ll teach you, they’ll train you. They’ll whatever they can do to help you succeed. My trainers are actually the ones who helped provide my job for me, to this day. Without them, I wouldn’t be who I am to this day…I would definitely say it’s probably one of the best things that the government has done…I feel like it’s a very good program, especially for people who can’t afford college or can’t continue on with their schooling. You can’t beat it.”