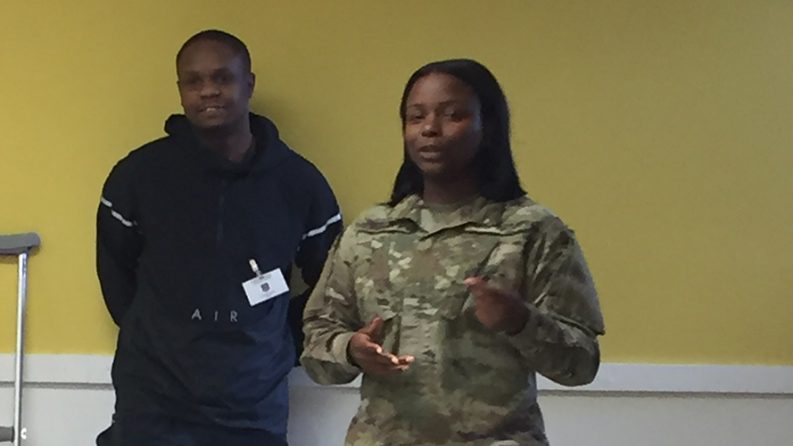 From “Rough Edges” to Military Success thanks to Hubert H. Humphrey Job Corps

Job Corps graduate T. Mixon is enjoying a successful career in the military thanks to staff at the Hubert H. Humphrey Job Corps Center who pushed her along the way. “I had lots of rough edges, and nobody could tell me anything. Job Corps,” Mixon says, “helped change that.”

Mixon completed her trade in culinary arts at the Humphrey center in 2016 and advanced to the military.

She says her culinary instructor, center director, and military recruiter were relentless.

“They would not give up on me,” she says.

Mixon completed boot camp with flying colors. “Going through Job Corps was tougher than boot camp, but because of those who believed in me and motivated me, I had to keep going.”

Sgt. F. C. Niemi, Mixon’s military recruiter and counselor says, “I will never forget Mixon. She worked hard for her success. Every student deserves a chance.” Mixon was recently in Minnesota to visit both her family and her Job Corps family before she deployed. Mixon came to the center and talked with new students.

She told them to get what they came for and stay away from the drama.

“Job Corps works if you want it to work.”

Mixon is very happy and proud to have completed her culinary trade at the Hubert H. Humphrey Job Corps.

“I never knew for sure if I would make it. At first, I doubted myself. Now—I believe in myself more than ever!” Private First Class Mixon is a unit supply specialist in Texas and is well on her way to a successful future serving her country thanks to Job Corps!