“We are very excited to have Leann Bertsch as our new Senior Vice President of Corrections,” says MTC President, Scott Marquardt. “She has an illustrious career in corrections and is very well respected throughout the nation and in her participation in international boards. So, welcome, Leann, we’re glad to have you at MTC.”

A native of North Dakota, Leann started her working career in law, as a legal aid attorney, then made her way to the court room as a prosecutor.

“At some point,” Leann explains, “I was asked by the governor to sit on his task force for violent and dangerous offenders, and completed that work with the task force about a year and a half later, and at that point the governor’s office asked me to join his cabinet as the Labor Commissioner.”

An invitation to serve as the director of the North Dakota Department of Corrections and Rehabilitation followed, where Leann served for 15 years – until now, when she joins MTC, a company she became familiar with while serving as the corrections leader of North Dakota.

“Private partners have a big role in corrections,” reflects Leann, “and MTC has one of the best reputations for providing services. When you’re in corrections for a number of years, you get to know your peers. And, of course, I’d known Odie Washington and Bernie Warner as well, and respected their expertise in the field of corrections.”

Of her service as the Director of the North Dakota Department of Corrections and Rehabilitation, Governor Doug Burgum said:

“Leann has reshaped the corrections landscape in North Dakota and beyond with innovative approaches and programs for youths and adults that focus on making better neighbors rather than better prisoners.” 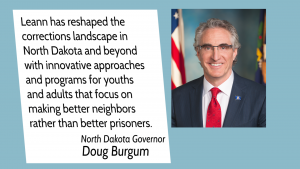 “I was very proud of the work we were doing in North Dakota,” recalls Leann, “I think it was one of the leaders across the country. One of the things that we were really focusing on is becoming very humane and making sure that there was no ‘us’ vs. ‘them’. And, so, when I had the opportunity to tour some of the MTC facilities, I was actually surprised to see as progressive of work that was being done. Obviously, the BIONIC culture, the Culture of Caring really resonated with me; that people were treated people in our care, custody, and control with respect. And when we talk about respect towards people who are in our care, custody, and control, you can’t have that type of culture unless you treat your co-workers and your staff with that same level of respect.

“I just want to continue building on the philosophy of MTC. I think my background and my values mesh nicely with the platform that MTC has. I think that we can stand above by capitalizing on the work that we do, and always looking at the best thing for individuals as the premise.”