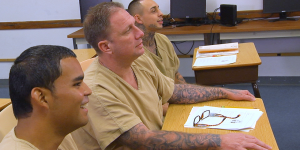 At the Lindsey State Jail in Jacksboro, Texas, programming opportunities for residents are an integral part of the facility culture.

“If they want to take advantage of those tools so they can be successful,” says Warden Grady Wallace, “there’s no reason why they can’t. We want them to utilize their idle time in a positive manner.”

Lynda Pack is the Executive Director of the Jacksboro Economic Development Corporation. She has observed the facility as a community leader.

“I think the things that they provide for the people that are incarcerated out here should help them get back into a lifestyle that maybe will keep them out of here from now on.  That’s what I hope.  That’s the big thing.”

“So far the teachers are real helpful,” says Jose Bustillos, a resident of the facility. “If you need time, one-on-one while the students are there, they’ll put you aside and help you and try to give you as much education as they can.”

Kendall Price is also a facility resident. “It takes special people to want to help somebody who’s incarcerated,” he says. “A lot of people in the outside world really don’t know that a lot of these guys were caught up in something they didn’t really mean to get caught up in. They want to live positive lives, they want to have a positive input in society. That’s what’s been a pleasant surprise to me.” 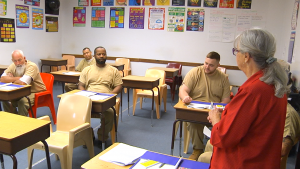 “You got real good guards here that will talk to you,” explains Jose Bustillos, “that will treat you like a human person, not just an incarcerator. So far, I’ve been here four months now and pleased to be here; but, not necessarily incarcerated.”

“I feel like I’m motivated now,” Kendall Price continues. “So much of this place depends on your state of mind, your mental capacity to realize, ‘okay, I made a mistake in the past, but the future is still bright’, if you’re ready to turn it around. And I definitely am ready to do that. I appreciate the things that this place has done to try and elevate the guys, rather than incarcerate people who they believe are no good for society. They are trying to show them the road that will lead them to a brighter future, and I think they’re doing a great job. I really do.”