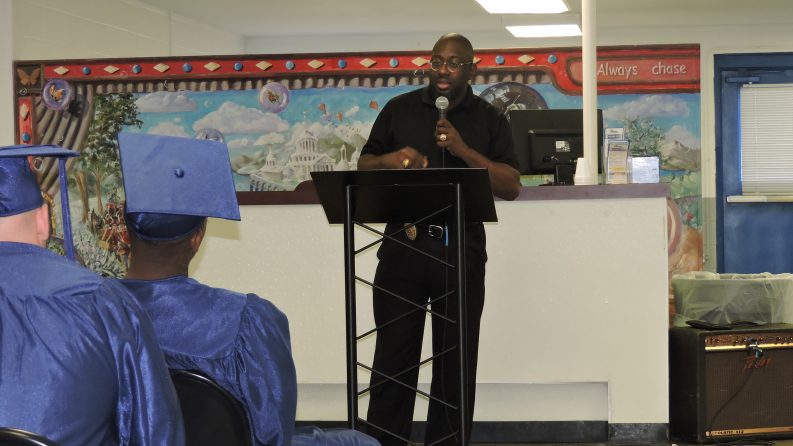 I have been privileged to be offered on many occasions to come into the MTC-Diboll Correctional Center to tour and share, and as with every experience, it becomes more and more eye-opening, encouraging, enlightening and even in an unusual way of enabling!

It is somewhat intriguing to put reality to the many things that were only known by heresy pertaining to prisons, inmates and even officers. One misnomer becomes obvious when one sees that the facility proves to be a place where an inner-healing begins to better prepare the offenders for being reintroduced to the public at a specific time of release. The many graduations we have attended and been honored to serve as the commencement speaker to witness the excitement and appreciation that the offenders possess upon receiving their furtherance of education certificates, and those who have studied a trade, is simply humbling. These men are working on making themselves become better equipped before their feet ever hit the pavement to start again fresh.

Truthfully, one reality that was initially discovered was the fact that this was a private prison and, honestly, we never were made aware that they even existed. We are grateful for this particular unit because it offers so much dignity and care to those who have made mistakes, those who have fallen on tough times, those who were simply in the wrong place at the wrong times, and then those who at minimum deserve to be treated as we were created to be treated: and that is with concern!

We can honestly state that all of the offenders we have managed to build a strong, transparent and brotherly rapport with have been a definite highlight of our life, simply because it does several things: It causes life’s freedom to become more deeply appreciated, to witness through a hard and strengthening way how hard places produce appreciated outcomes, and how much we are alike even with a sea of bars serving as a dividing line of those who have made evident not-so-good choices to those who have been experiencing grace on many other levels.

The process of passing through security serves as a wake-up call that the place one is passing from to the world they are passing into speaks of a place that is controlled, chosen and prayerfully leads to conviction; it every time leads me to a greater conviction to return to this facility again to desperately share with those who call this home for a season or a lifetime that hope is always lingering near!

In every instance we have to commune with these offenders, the conversations to me always serve as a breath of fresh air; the reason being is that in man — not all cases, but in many pure conversations — is being experienced. It is not forced, convenient or haphazardly carried out, and that causes one to appreciate the work the prison is doing, because if it was not the prison how could this obvious mentality of purity be so constant? The spirit, mindset and camaraderie among the officers and those who are closest to being able to in a spiritually loving manner touch these offenders are changing lives, and not just spiritually changing lives, but for the betterment of the communities that some will be reintroduced to!

Lastly, if prisons are said politically to benefit off of a headcount or those imprisoned at a specific facility — as crazy as this may sound, this facility should be the one NOT to make money predominantly on housing heads for beds, but because they are making a difference one offender after another, and ultimately this will begin to restructure and mold the minds of these offenders to not become repeat offenders OR to make a permanent change to their offender status to an issue that temporarily had them being redundant and repetitive. This facility is all in all a miracle because, in our view, we are not only seeing changes in the offender but this program and prison has made a change in ME!

Diboll Correctional Center is accredited by the American Correctional Association—
achieving 100% compliance for both mandatory and non-mandatory standards in
its most recent audit. Other accreditations and certifications include the Correctional
Education Association and the Prison Rape Elimination Act (PREA).