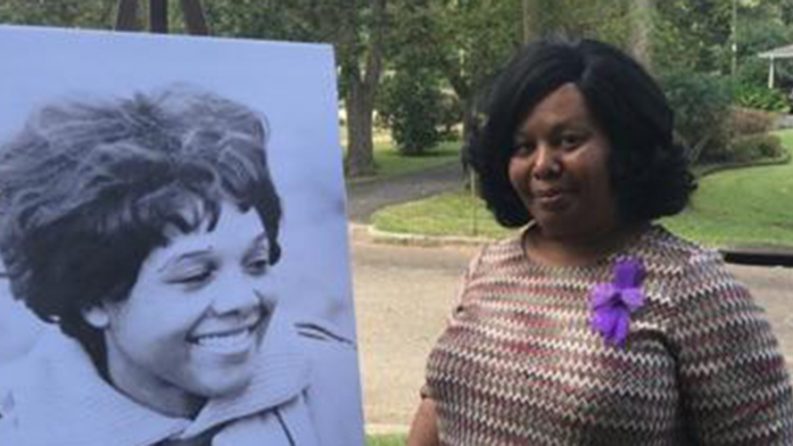 Led by Wilkinson County Correctional Facility Chaplain Roscoe Barnes, a group of MTC staff at the Wilkinson facility in Woodville, Mississippi recently set out to honor a civil-rights activist whose courage and determination had an impact on many people in the South and throughout the world. Anne Moody was honored by Wilkinson staff and the City of Centreville, MS where she was born. The mayor and city council issued a resolution renaming a street in Moody’s name and proclaiming September 15 as “Anne Moody Day”. The story was picked up nationally! Read the article below by the Washington Post. FILE – In this May 28, 1963 file photograph, a group of white people pour sugar, ketchup and mustard over the heads of Tougaloo College student demonstrators at a sit-in demonstration at a Woolworth’s lunch counter in downtown Jackson, Miss. Seated at the counter, from left, are Tougaloo College professor John Salter,and students Joan Trumpauer and Anne Moody. Anne Moody, a civil rights activist who wrote about challenging segregation in the South is being honored in her hometown, two years after her death. (Fred Blackwell/The Clarion-Ledger via AP) (Associated Press)

JACKSON, Miss. — A civil rights activist who wrote about challenging segregation in the South was honored in her hometown, two years after her death.

About 70 people gathered Friday in the southwestern Mississippi town of Centreville — population 1,680 — to unveil a sign for the newly renamed Anne Moody Street. Moody was born in Centreville on Sept. 15, 1940.

Her memoir, “Coming of Age in Mississippi,” was published in 1968 and is required reading in some schools. It recounts her early life in a poor family and her participation in civil rights activities that put her in danger, including efforts to register black voters.

Roscoe Barnes III, who is chaplain at a prison near Centreville, helped organize the Anne Moody Day commemoration, held on what would have been her 77th birthday. He said her son, Sasha Straus, attended, as did some of her siblings and cousins.

“Here’s a woman who literally put her life on the line in the fight for freedom and justice,” Barnes told The Associated Press. “We’re here because she was there. She survived threats, beatings, incarcerations.”

On May 28, 1963, Moody was part of an integrated group of students from historically black Tougaloo College who staged a peaceful sit-in at a segregated Woolworth’s lunch counter in Jackson, Mississippi. They had worked with Mississippi NAACP leader Medgar Evers to prepare for the protest.

White high school students, egged on by some adults, dumped ketchup and mustard on the heads of Moody and the other protesters. She wrote that after she and two other black students started praying at the counter, one white man slapped her and another threw her against an adjoining counter. One of the praying students was pulled violently from his seat.

Evers was assassinated outside his Jackson home two weeks after the sit-in.

After Moody graduated from college in 1964, she moved to New York, where she wrote her book. She returned to Mississippi in the mid-1990s but never felt at ease in the state, said one of her sisters, Adline Moody.

Anne Moody had dementia before she died at home in Gloster, Mississippi, in 2015. She was 74.

Barnes does volunteer work for the Anne Moody History Project, which is based at the privately run prison where he works, Wilkinson County Correctional Facility. He said some inmates and have been reading and discussing “Coming of Age in Mississippi” as part of a book group. He said he also gives away copies of the book to people who live in southwestern Mississippi.