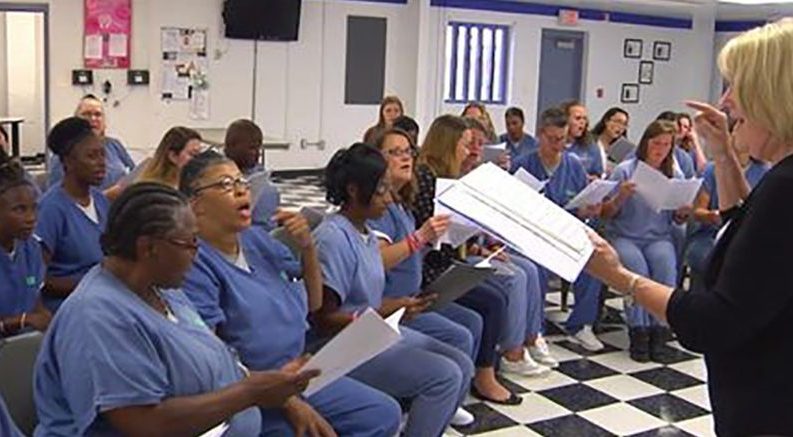 NEWS: Place of healing and hope…

Holly Highfield was one of about 50 blue jumpsuit-clad inmates at Gadsden Correctional Facility’s women’s choir group, the MTC Glee Club.

Each week for five semesters, the ladies sang cheery African hymns of hope; Latin canons about peace; and ethnic children’s lullabies, like the South African “Abiyoyo.”

Started two years ago at the prison with Florida State University student volunteers, the choir meets for an hour and a half every week.

As soon as the volunteers walk in from their 30-mile drive out to the Quincy prison, the inmates cheer and clap.

Spearheaded by FSU music professor and choral conductor Judy Bowers, the choir is practice for the student volunteers, many of who aspire to be music teachers and conductors themselves.

Bowers believes in “creating people who know their own soul.” Music, she says, helps to do that.

But Bowers is retiring. This fall she heads west to assume a three-year position as an endowed professor of music at the University of Louisiana-Monroe.

Until a replacement is found for her spot at FSU, they’ll be less singing at the privately-run Gadsden Correctional. The prison choir is on hold.

At first, Bowers was hesitant when a warden reached out to her about starting a choral group at the facility. In her 27 years of teaching at FSU, she hadn’t conducted a choir inside a prison before. But the warden reassured her. She wanted her expertise. She insisted singing would be a helpful exercise for the female inmates, Bowers recalled.

“It was a rocky start,” Bowers said. Most of the inmates didn’t know how to read music or about the connection between breathing and singing. “Everything was shouted.”

But within 15 minutes, she led them from intoning to humming a four-part harmony.

And within six weeks, they were serenading their family members, who’d make their way to the prison to see them perform at an end-of-semester concert.

The students would mentor the inmates in music and form a “buddy system” within the group.

More than a choir, it became a space where inmates could set goals and affirm their capabilities in “pow-wow” sessions at the end of each rehearsal.

It was a place where they could remember the strong women role models in their lives and sometimes learn a music history lesson or two.

At the end of each rehearsal, the inmates and students sing together a number called “We are One.”

Screenshot from video of an MTC Glee Club rehearsal. (Photo: Courtesy of Management & Training Corporation)
“The biggest lesson that I’ve learned,” said choral music education major Sarah Mohesky about volunteering with the prison choir, “is you can’t judge a book by its cover. Just because a woman or man is in prison, that doesn’t define who they are.”

It opened the aspiring teacher’s eyes to give “first” impressions a second chance.

“As a teacher, I’ll definitely look at all my students differently now and not judge them right away,” she said. “There’s more to a person than what we see.”

The weekly hour-and-a-half rehearsal is also a medium that breathes new life and hope into their otherwise monotonous days drenched in regret.

“It was a part of my journey that allowed healing,” said Highfield, 40. The Jacksonville woman served 10 years in prison, about three of them at GCF, as a result of a car accident.

One song, she remembers, gave her shivers every time they sang it — and hope for a new life, a new slate.

Highfield had only two weeks left in prison. She could see her new life on the horizon.

She whispered to her, “Freedom is coming, Sarah.” At the end of the song, Mohesky recalled, they looked at each other and cried.

“You feel hope rising up in your spirit as the song goes,” she said, her voice articulate,  upbeat, and enthusiastic.

“You just begin to feel more and more hopeful. It takes away those feelings of sadness and loss and regrets, and replaces them with hope and faith and promise.”

During each rehearsal, Highfield and the FSU undergrad would sit next to each other. She’d save Mohesky a seat — they were harmonizing altos.

“There’s a certain healing quality about music,” Highfield said. “And there’s such a bonding agent when it comes to being in a group choir.”

For Robertson, music was always central to her life. She had been singing since she was a little girl and attended Edward Waters College in Jacksonville on a choral scholarship. She performed with her college choir at Carnegie Hall in New York, she said.

She never imagined she’d end up in prison.

“But that hour and a half or so that we’d rehearse, it was like being free.”

Screenshot from video of an MTC Glee Club rehearsal. (Photo: Courtesy of Management & Training Corporation)
Singing, to her, is “a breath of fresh air,” or, “like reading a really good book. You could get lost in that really good book.”

The choir, she said, is a way of making the most of her time there, of bettering herself.

“The choir just lets me know that even though I’m in prison, I’m still human. It reminds me that I’m still a mother, a daughter, a sister.”

Amon Eady, an FSU doctoral student, helped conduct the choir, prepping the women for their concerts and the undergraduate mentors for their teaching jobs.

It was a way for the undergrads to “watch us do what they would hopefully do when they finished school,” he said.

But now he’s so fascinated by the subject that he plans to pursue research about it, exploring “music as a rehabilitative activity in prison.”

For Eady, it was less about the musical stimulation of the group and more about the “power of the process,” the sense of empowerment and community that came with the practice.

“As an educator, it was nice to be reminded of people who were kind of out-of-sight, out-of-mind — people who are … in one place, and tend to be out of our mind,” he said about the inmates.

Though his training was more geared toward teaching kids in public schools, Eady realized there wasn’t much difference in the teaching strategies.

Buy PhotoFSU Professor of Choral Music Education Judy Bowers in her office on the university’s campus Thursday, July 6, 2017. Bowers has worked at FSU since 1990 and for the last five semesters has organized a choir at the Gadsden Correctional Facility for women. (Photo: Joe Rondone/Democrat)
“The challenges that the ladies face there are just like some of the challenges that kids face [in public schools],” he said.

Since her release, Highfield is living in Alabama and has auditioned for a part in a local showing of “Annie” the musical. She was cast in the role of Mrs. Hannigan.

Her son died from a drug-induced cardiac arrest in 2014, just before she was admitted into Gadsden. He was a charismatic actor, cast in several plays throughout his life before his death at the young age of 20, she said.

Her role in “Annie,” she hopes, would be a way to “honor his life.”

Highfield hopes a replacement conductor is found so the choir can continue. Had she not been part of the glee club, “I don’t think I’d have the confidence to even audition for the play — and much less be cast.”