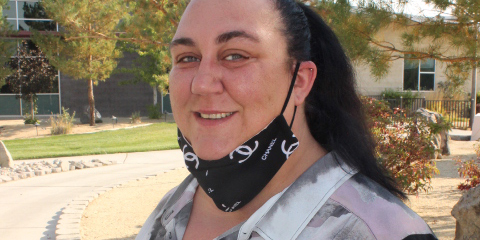 From Student to Instructor Thanks to Job Corps

A year ago, Sarina Benenati started her dream job as a retail pharmacy tech instructor at Sierra Nevada Job Corps.

“During the hiring interview, I mentioned that if it was professional to beg, I would do it to get the job,“ Sarina says, only joking a little.

“You see, I have a unique perspective on the program. I’ve lived on both sides of the fence now, as a student and an instructor, so I can really identify with challenges my students face. I can relate.”

Sarina grew up and went to school in Montclair, New Jersey. “My high school classmates were mostly “high school affluent”. I didn’t fit that profile. I didn’t fit in, period. I soon found myself hanging with the wrong crowd, slipping further and further toward self-destruction. I had just turned 16 when my mother mentioned Job Corps as an option, maybe the only option I had left. After mulling it over, I chose Job Corps, thank God.“

“I went straight from the concrete jungles of Jersey to the Red Rock Job Corps Center, located deep in the woods of northeast Pennsylvania.  We called it “The Rock” because it was completely isolated, which proved to be a good thing. I could concentrate on positive things there.  We were basically a bunch of city kids, mostly from the Philly area, who had never been exposed to nature. Have you ever seen a hundred teenagers run screaming into the dorms to hide after a young bobcat ran past them chasing a rabbit?”

Sarina spent two years in the painting program at Red Rock Job Corps. She earned her high school diploma and painting certifications. She then moved to Hanford, California in the farm country of San Joaquin Valley.

“Because of what I learned from the painting trade,” Sarina says, “I got a job right away selling paint at Sherman Williams.”

Two years later, she found herself in a pharmacy to fill a prescription and felt right at home. She says, “Something clicked.”

Soon after, she began a 20-year career as a pharmacy tech, culminating in a teaching position at the Sierra Nevada Job Corps Center.

“My advice to someone interested in Job Corps: jump headfirst into it. Don’t look back. Once you start, hang on to this experience. It’s just a tiny part of your life, but it will follow you and help you from here on out. I would tell them how I was going down a real rugged path toward self-destruction before my mom brought up Job Corps as an alternative. If it weren’t for Job Corps, I would have been demolished. I know that. I support the program 1000 percent. It saved me, and now I get to help save others so they can have full lives. I’m so lucky to be working here. It’s so rewarding to be helping young people who are so much like I was, once upon a time.”