Job Corps is the answer for so many young adults, people like Christopher Lewis.

“I used to be in college back home in Grenada, and I had to withdraw to move to the United States. Because of the cost of college for students coming from international countries, I had to come to Job Corps because I see that there’s an opportunity to grow and develop.” 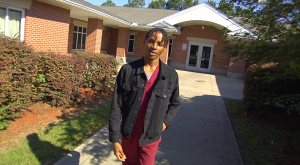 Christopher is enrolled at the Brunswick Job Corps Center in Georgia. He says, “It’s a good education so far. I’m learning a lot.”

He’s studying to become a medical assistant. He says the career is a good fit.

“I always had a, you know, care for people who are sick and injured.

His career choice became especially clear after his grandmother was diagnosed with a deadly disease.

“My grandma had cancer. And I had to care for her during the whole process with her.”

The medical profession runs in the family. His mother and aunts are nurses and his uncles are doctors.

After Job Corps he says, “I’m going to move on to do my bachelor’s in nursing or physical therapy.”

The Job Corps program has given Christopher just what he needs to have a brighter future.

“Without Job Corps, I might have been working at a fast-food joint right now…this program has opened up a lot to me, like resources, I can come here and get an education and move on. It can help me move on in life to bigger and better things.”