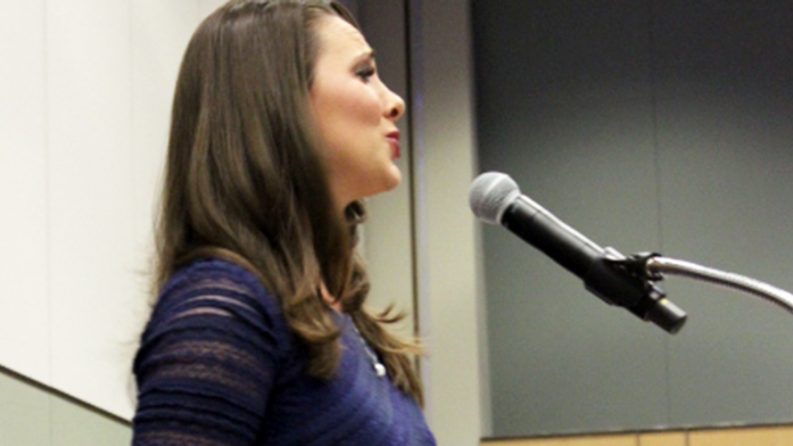 KTVN Channel 2 News anchor and reporter Arianna Bennett was the keynote speaker. She spoke fervently about the importance of their new jobs and the impact they will make in peoples’ lives. She also reassured them about not letting the inevitable embarrassing mistakes they will make get them down. “You are going to make mistakes,“ she said. “They are coming for you…so get ready for them.”

Deputy Center Director Sheilah Hernandez was very impressed with Arianna’s efforts. “She nailed it. She gave a very positive outlook on what the future holds for the grads.”

Earlier in the week, Arianna had requested information from students regarding their Job Corps experiences, and some of the grads-to-be responded. ”I had to leave my family and come to Reno. I didn’t know anybody. But I’ve grown as a person since I got here. If you come to Job Corps and are determined to complete a vocation, you can do it. Hard work pays off!”

“Before Job Corps, said pharmacy technician graduate Maria Lopez, “I worked at Old Navy by day and helped my mom clean houses by night…I tried online classes but realized it would take my forever to finish. At Job Corps, I became less shy and more confident. I found a career I love instead of a dead-end job, and now I can return home and help my mother financially.” Hotel and lodging graduate Yamungu Kabute, originally from the Congo talked about his struggles and triumphs. “I had to leave my wife to come to Job Corps. I was worried about my English language level, but all the staff here were so excellent and ready to help me achieve my goals…and I did.  At Job Corps, I learned that asking for help is not a sign of weakness, it’s a sign of strength.”

Bridget King graduated from the culinary program. She had this to say about her time at Job Corps: “I was newly homeless and living off food stamps when my grandmother mentioned Job Corps. I haven’t looked back since. Now, I have a part-time job and plan to go to college. It’s the best thing that ever happened to me.”